One chapter down, 30 more to go (in this draft)

For a while, I honestly thought this day would never come: the day I finally got to start revising my WIP.

I never set out to write a trilogy.  That’s a whole lot of writing for anyone, but for me, being such a slow writer to boot, it at times felt near-insurmountable.

I’m convinced the only thing that got me to THE END of the first draft was the iron-like strength of my discipline.  I may have many shortcomings as a writer, but showed up at the page is not one of them.

And my persistence paid off!  I’ve entered a whole new stage of my writing journey, one I’ve never before encountered for a work this long.

In preparation for this, I read through my entire first draft and colour-coded each chapter (red, yellow, or green) based on the amount of fixing required.  Chapter one, unsurprisingly, earned a code red, so I’d be starting my revisionist career in full swing.

It took a whole week, but I did manage to get through it, and over the course of creating of chapter one – draft two, I had the following reflections:

I began my rewrite two days after New Year’s, prior to which I’d not done anything writing-related (either drafting or reading though) since mid-November.

In retrospect, such a lengthy break was not a good idea.  True, it gave the story a chance to cool in my mind.  But I’ve blogged before about how I struggle with my writing after I come back from a long vacation away from it.

This time, the situation was even worse: I wasn’t just drafting; now I was trying to make pre-existing writing better, all the while suffering a near-inability to string a compelling sentence together.

Literally, it made my brain hurt.

I wrote my entire trilogy using WordPerfect.  I’ve been a loyal user of this program since 1996’s version 5.1, which was DOS-based and on screen produced white type on a dark blue background.

I like this program for its clean user interface, its relative lack of automation, and, in particular, the ability to save up to 200 Undo/Redo changes, which I find indispensable while creating a draft.

For revision, though, I wanted to track every change I made at a glance, and no program does this better than Microsoft Word.

However, Word isn’t without its faults as well.  Even with proper headings and bookmarks, navigating through a 400-page document in Word is an unwieldy mess.  As well, because the file was so large, spellcheck and autocorrect stopped working, plus the autosave backups took forever and seemed to dampen my computer’s performance in the process.

In the end, I was forced to break the manuscript up into three separate documents just to get full functionality back.

Back in 2012, when I’d just started writing again after having quit six years prior, I joined a writers’ social meetup group*.  During one of the meetups, everyone read a portion of their WIPs.  I chose to read the opening pages of book #1 because I was rather proud of them. 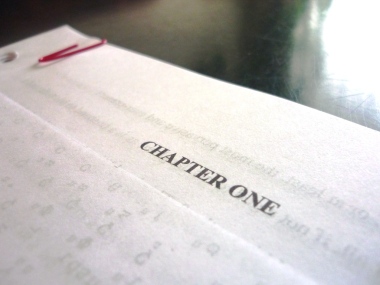 At least, I was until I heard the consensus of feedback: too slow; nothing happened; fairly good writing and use of language, but far too much exposition.  I was devastated.  Until I realized it was true.  Then I became determined to make it better.

Except that proved much easier said than done.  For two agonizing weeks, I wrote and rewrote, attempting to fix my hook.  But other than a new opening line, nothing I tried seemed to work.  Eventually, I gave up in disgust and moved on to writing books #2 and #3.

However, because I save everything, I saved that thwarted effort from book #1 as well.  Reading it back again, it was just as rough as I remembered – so choppy and directionless, it practically dripped with the sweat of my fruitless exertions.

But the direction of my ideas was solid, and with my better understanding of both what my story is about and how it ends (because the first chapter is answered by the last chapter), I was able to repurpose almost all of the material into the new chapter one.

4) Read the change you want to be

At the same time that I was revising chapter one, I was reading a book I wasn’t enjoying.

I won’t bother to name and shame, but suffice it to say I found the narrative voice underwhelming, the pacing sluggish, and main character a bit flat.  Not only was I bored with this book, coupled with my post-holiday writing malaise, I felt like I was lapsing into many of the book’s same bad techniques.

J.K. Rowling to the rescue! (Or more specifically, her mystery-writing alter ego, Robert Galbraith.)  Rowling is an author I’m very fond of, particularly her adult fiction: I find her narrative voice incredibly strong, her use of figurative language vivid and original, and the details she chooses to include so insightful and clever.

Starting to read the latest Galbraith title, Career of Evil, was like a renaissance, reminding me what good writing sounds like, even in something as simple as describing a building:

It was half past one before she reached the forecourt of Wollaston Close, the Strata building looming over the shabby old flats like an emissary from the future. (p. 382)

I’ve written before about how I like to read while writing – about how a well-written book doesn’t discourage my writing but instead inspires it.  Clearly such will be the case with my revision as well.

I love to listen to music while … doing pretty much anything.  Writing is no exception to this so long as it’s music I know well, to the point that it almost disappears in my mind.

I have plenty of music that serves this function, both with lyrics and instrumental.  However while rewriting chapter one (as opposed to while I’m drafting), I couldn’t stand to hear a single song with lyrics.

For whatever reason, I found the presence of extra words in my head – even well-known ones that were just passing through – incredibly distracting.

After having spent so very long just writing my first draft(s), with my answer to the infernal question of how my book was going forever being, “I’m still writing”, I was thrilled to finally be able to tell people something different.

Colour-coded chapters. All 31 of them.

Because of this, when I started rewriting chapter one, I was super gung-ho about it.  I mean, I went all in, working on it for days in a row and hours at a time.  I stayed up far too late every night and continued fussing over what I’d written the following (weary) morning before work.

I worked on it like I was near the end of the revision, not the very start of it.

The result of this at the end of the week was twofold:

The lesson I learned is that I need to slow the hell down and figure out how to work sustainably.  Because that was just chapter one.  My WIP is 31 chapters long.

I never used to understand how some writers take four or five drafts to perfect their novels until I started dealing with my own.

I realize now that I can only do so much fixing in a single pass.  I have the unique misfortune of having written the first draft of my trilogy’s first novel in the wrong genre, so just correcting the story content is one pass right there.

I’ve previously mentioned that I have a wee little problem (read: a massive, perpetual problem) with complex, run-on sentences.

I actually thought I was doing a decent job with paring those down while rewriting chapter one, but two writer friends who gave it a cursory read say otherwise.  So working on that will take another pass –realistically probably more than one if I’m truly as bad as all that.

And then I still need beta readers to help me ensure the story actually works, and more drafts to incorporate their feedback.

All of which is to say that although I’ve finished draft two of chapter one, I’ve really barely gotten anywhere at all.

A/N: I now run the writers’ social meetup group.  For some reason, it felt important that I share that.

What have been your revision tales of woe?  What advice can you offer on what I’ve done wrong thus far?  Let me know in the comments.

17 thoughts on “Thoughts on Revising My Novel’s First Chapter”