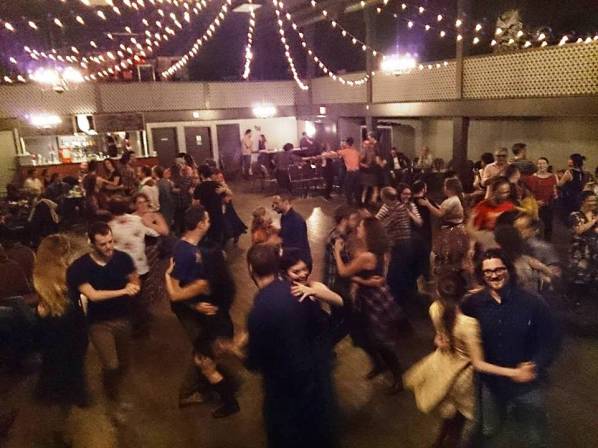 The scene at a recent square dance in Vancouver, BC.

The first time I ever square danced was in Hope, British Columbia.

This was a good six or seven years ago while I was attending a canoeing skills camping weekend retreat with a group of friends.  I’m as outdoorsy as the next person, but not specifically into canoeing.

Rather than a desire to perfect my J-stroke, I recall my decision to tag along having more to do with FOMO and, if I’m to be honest with myself, the possibility of meeting new people (read: single guys) since the present object of my affection – who was also in attendance and a skilled canoeist – couldn’t care less about me in that way.

We arrived in shifts at the campground on Friday after work following many flustered discussions about departure times, pickup routes, and which type of music was and was not permitted in which car.

Within about 30 seconds of arriving, I noted we were the youngest people there.  By a good 30 years at a minimum.

To the more canoe-inclined among my party, this was an exciting prospect – the opportunity to learn skills from paddlers with several decades of experience.

But for me, not only would I not have the chance to make my crush jealous, I was aghast at what these old people had lined up for entertainment.  Saturday night square dancing?  Seriously? Didn’t the very name – square dancing – pretty much say it all?

As it turns out, it was.

In truth, among the most fun I’ve ever had with anyone anywhere, to the point that there’s little else I remember about that weekend besides the square dancing.

Which is probably why my J-stroke still sucks to this day.

Do try this at home

In the intervening years, I’ve attended two more square dances – most recently, just three weeks ago – which isn’t nearly enough for my liking.

(I’ve already decided that if I ever get married, there will be square dancing at the reception.  Consider yourselves warned.)

Square dancing is easily my most hipster hobby, although I love it with all my heart, and as un-ironically possible.

For those unfamiliar with square dancing, it’s an old-time folk or county dance comprising four couples (eight people) arranged in a square, one couple per side and everyone facing each other and the square’s center.

The caller and the live folk band in Vancouver

The movements of the dance are directed by a caller, who calls out a sequence of steps that involve interaction with either your partner, your “corner” (the person on your opposite side from your partner), or one or both members of any or all of the remaining couples, the result often being the formation of various geometric figures and repeated patterns.

The music associated with square dancing – at least in North America – tends to be lively American folk or bluegrass.

If you haven’t tried square dancing, you’re truly missing out on something special. One good thing about a square dance is that you don’t necessarily need to arrive with a partner.  At all three square dances I’ve attended, people who showed up single were still able to participate, especially as various halves of couples needed a break (square dancing can be quite the workout!)

Another square dancing advance is the presence of the caller to tell you exactly how to move.

Traditional square dancing (as opposed to the modern Western style) involves only a limited number of calls so that inexperienced dancers can learn on the fly rather than through a series of lessons.  As well, at all three of my past dances, the caller demonstrated all the necessary steps before each round.

In not having to use your imagination to come up with your own dance moves to make yourself look good, square dancing is very low pressure, with the potential for unknowingly embarrassing yourself with an Elaine-from-Seinfeld dance all but impossible.

The thing that interests me most about square dancing, though, is how it seems to be such a cultural artifact of its time. 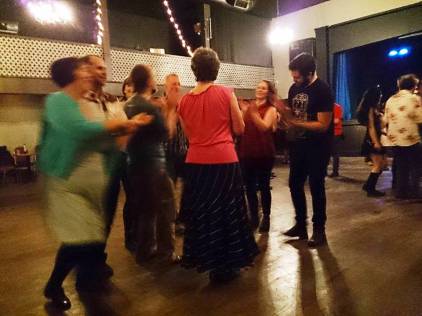 A square up close in Vancouver

Nowhere does this appear more evident than in the names of the calls.  Many of them directly reflect Old West activities and society, such as Duck for the Oyster, Shoot the Tin Can, Box the Gnat, Stack the Wood, and Weave the Ring.  Each partner in a couple is also given a folksy moniker like “Birdie” or “Ma” for the female and “Crow” or “Pa” for the male.

There are also a surprising number of calls whose names are corrupted from French; indeed some of the most recognizable square dance moves follow this pattern: Do Si Do (dos a dos, meaning “back to back”), Allemande Left and Allemande Right (a la main, or “by hand”), Sashay (chassé, meaning “chase” or “hunt”), and Promenade (pronounced “prom-in-AID” instead of “prom-NAD” and meaning “walk”).

Hearing those French calls again at my most recent square dance suddenly made me very curious about square dancing’s origins and how so many French words wound up in such an American custom.  According to Wikipedia [1] [2]:

One final point from Wikipedia mentions that in many cities and college towns, there exist revival groups dedicated to keeping square dancing alive and introducing it to the public.

Here in Vancouver, I’ve discovered there is indeed a growing square dancing scene.  It’s one that I definitely plan to seek out and take part in.

Have you ever square danced?  Have you ever tried any other form of non-mainstream dance?  Which is your favourite?  Tell me about it in the comments.