So, I finally saw Pacific Rim a couple weekends ago.

I opted to give this movie a pass when it came out in July, believing it to be just another dumb summer blockbuster involving robots, a la Michael Bay’s Transformers franchise.

(I loved the original 80s Transformers cartoon, yet there’s so much to hate about those movies.)

As a reader at heart, I tend not to like most movies I watch, especially those that come out in the summer.  If I watch a summer flick at all, it’s usually on video, and for the benefit of some mindless entertainment after a tough week at work.

But Pacific Rim surprisingly gave me a lot to think about, particularly with regards to its characters.

One of the blogs I follow, associate literary agent Maria Vicente’s I Believe in Story, features a category of posts entitled “Character Study”.  It’s out of a case of imitation being the highest form of flattery that I come to adopt the same feature into my own blog.

That and as a follow-up example from my recent post about suspense, in which I recommend casting unconventional characters because they’re unpredictable (and thus suspenseful).

Pacific Rim’s Raleigh Becket is one of the most unconventional characters I’ve come across in a long time in the sci-fi military adventure genre.

A hero (un)like any other

Raleigh begins the movie as a hotshot pilot of a jaeger, a giant, robotic fighting machine designed as a melee weapon against the alien kaiju, which emerged on Earth from an inter-dimensional breach at the bottom of the Pacific Ocean.

All jaegers are operated by two pilots via Drifting, a system that joins their minds as one so their combined brain power can withstand the neural load associated with controlling the robot with both body and mind.

Raleigh pilots his jaeger (Gipsy Danger) with his older brother, and as the movie opens, is shown to be the more cocky and maverick of the two as the pair get set to take on the largest kaiju to date.

Within the first 10 minutes of the movie, Raleigh’s brother is killed in the attack, Raleigh is injured, and his jaeger is badly damaged.

The scene then skips to five years later where Raleigh is longer a pilot but instead performing menial labour for food rations until his old commander re-recruits him to assist in a last-ditch long-shot mission to try to end the kaiju threat for good.

Now at this point, in most sci-fi military adventure movies, Raleigh’s personality would follow one of two general patterns:

But Pacific Rim does it refreshingly different.  Raleigh is definitely still mourning his brother’s death, but he’s also obedient, cooperative, and, frankly, kind. 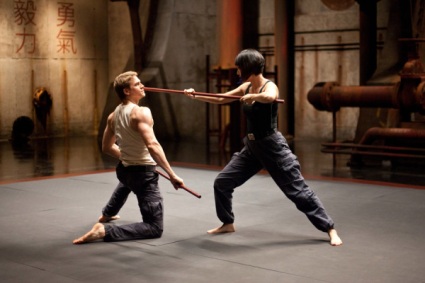 Upon meeting Mako Mori, the rookie who eventually becomes his new co-pilot, he demonstrates congenial curiosity about her life, and advocates for her to be given a chance to fight when the commander expresses reluctance.

He advocates for her again after she commits a serious error, not because her grounding results in him facing the same fate, but rather because he relates to her motivation and feels the commander is holding her back from fulfilling her personal quest due to the fatherly affection he has for her.

He and Mako work well together throughout the entire movie, not once succumbing to disputes or egoism related to his greater experience.

And even after winning at fisticuffs, rather than strut around like the alpha male he appears to be in the movie poster above, Raleigh is quick to forgive and forget for the good of the mission.

Neither does he at any point put the romantic moves on Mako, theirs being a much deeper relationship built on mutual loss, emotional support, and hope for a better future.

Much of Raleigh’s character is a reflection of the movie’s larger, theme of trust and teamwork, which is also atypical for this genre.  In melding of two pilots’ minds to operate the jaeger, a sharing of thoughts, feelings, and memories occurs, thereby necessitating strong trust and openness between each pair.

As well, every goal that is accomplished in the movie comes as a result of multiple layers of collaboration: pairs of pilots; two rival scientist who eventually come to an understanding; jaegers from a number of different country and built following international reconciliation of hostilities in face of a larger, global threat.

I actually really enjoyed this movie.  To be sure, it’s not perfect: there were a few WTF moments (e.g. deciding to build a wall to deter the kaiju after having already spent all the world’s resources building the jaegers) and a few elements I wish had been explored more (e.g. how Drifting effects its participants over the long term, and how fighting with hanbō staves alludes to two people’s compatibility for Drifting).

Plus, it’s still, at its core, a movie about giant robots fighting giant monsters in the middle of the Pacific Ocean.

But Pacific Rim contained a lot of interesting characterization choices and story themes that, for me, elevated it above the typical mindless fare of summer movies, and, even more surprisingly, has left me hoping for a sequel.