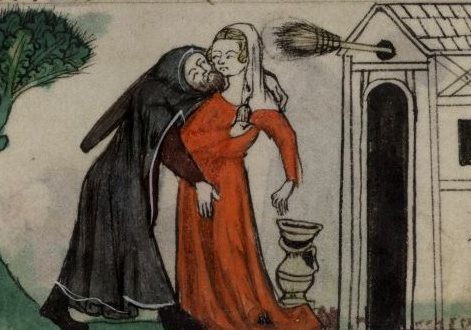 The previous Medieval Mondays post on sex discussed perceptions of women’s sexuality in the Middle Ages.

It covered historical notions of women as “misbegotten” lesser humans, as helplessly insatiable and promiscuous, and as ever in danger of being considered unmarriageable and “spoiled goods” if subject to even the hint of impropriety.

From there, the segue into women and rape in the Middle Ages practically writes itself.

In The Lady in Medieval England: 1000-1500, author Peter Coss discusses the rape of medieval women.  According to Coss,

The standard procedure in such cases, established by Glanvill’s day, was for the wronged woman to bring an action of appeal against her attacker. (p. 140)

Glanvill refers to Ranulf de Glanvill, Chief Justiciar of England from 1180-1189.  He was the author of the 1187-9 treatise on English law known as the Tractus de legibus et consuetudinibus regni Anglie (“Treatise on the Laws and Customs of the Kingdom of England”), which discusses, among others, the crime of rape and its punishment.

According to the Tractus, the penalty for rape, as for all other felonies, was said to be execution.

Half a century later, around 1235, cleric and jurist Henry de Bracton wrote a follow-up treatise, De Legibus et Consuetudinibus Angliae (“On the Laws and Customs of England”), which indicated, according to Coss, that the punishments for rape had softened:

In Bracton’s time the rape of a virgin was punished by the loss of eyes and testicles: the eyes because it was they which had given the man sight of the maiden’s beauty and his testicles because it was they that had excited his lust.  Lesser punishments were considered more appropriate for the rape of others—married women, respectable widows, nuns, acknowledged concubines, even prostitutes—for they were all under the king’s peace[.] (p. 140)

Coss indicates that these lesser punishments were unfortunately not indicated in the treatise.  Nonetheless, even the idea that different penalties existed for the rape of different categories of women is telling.

With each category widely considered more ignominious than the previous, it casts doubts as to how seriously the issue of rape was taken by masculine medieval society—this despite Bracton’s claim, according to Coss, that “The rape of a woman (raptus mulierus) is forbidden by both human and divine law.” (p. 139)

So too is Coss himself skeptical, claiming that “Seeking justice against a rapist must have been an arduous and deeply unpleasant experience, just as it is today.” (p. 140)

He goes on to indicate all that a medieval woman had to do in order for her action of appeal against her attacker to be deemed valid.  This procedure included the following:

It was essential that the woman followed this procedure precisely with no technical errors, notwithstanding her trauma from the experience itself, or else her case could be thrown out.

Even in following the procedure, Coss states that, “The conviction rate was extremely low, and the penalties laid done by Glanvill and Bracton were rarely, if ever, exacted.” (p. 141).

The accused could raise one of a number of exceptions to invalidate the claim, such as that he did not deprive the woman of her maidenhood because she was still a virgin.  In the medieval times, rape was only believed to have occurred if it involved penetration.  To assess this, four law-abiding women would be called in to examine the victim.

Even if the victim had been penetrated, the case still had to go before a jury.  Here, the accused could argue any of the following:

In no way is this a complete list of the possible exceptions.

Unsurprisingly, given the procedural and emotional arduousness of bringing a rape charge to trial, according to Coss,

[T]he number of rape cases on the plea rolls of Bracton’s day is not particularly large.  Indeed, it is perhaps surprising that women were prepared to bring the cases at all. (p.141)

The fines on the Pipe Rolls from Glanvill’s day and after suggest that in reality this had long been the worst that a convicted rapist could normally expect.  There was every reason to suppose that many of Glanvill’s male contemporaries regarded rape less seriously. (p. 141)

Another common penalty for a convicted rapist was for him to marry his victim.

Reading all if this, it’s impossible not to see the modern day equivalents, a virtually unbroken chain of willful misperception and latent misogyny for more than 800 years.

The Lady in Medieval England: 1000-1500, with Coss’s attendant remarks on the similarity of medieval rape proceedings and modern ones, was published in 1998.  However one needn’t look very far to recognize that little progress has occurred in this regard since:

Similarly, the notion of women’s supposed insatiability for sex, which dates back to medieval times and earlier eras still, presents in modern times as well.

It can be overt and extreme, such as the online world of Men’s Rights Activists, who blame the entire female gender for their shortcomings.  It can also be subtle, such as ongoing efforts in the United States to limit women’s access to birth control and to criminalize abortion (as well as the enduring myth that women use abortion as birth control).

The notion also presents through the idea that sexually-liberated women will sleep with any man (if not every man) so long as he is of a certain desirable type.  That women purposely dress and display themselves provocatively in order to attract such men, thus making them culpable in any form of sexual assault that is inflicted against them.

”What was she wearing?” is still a common first question posed when modern women are raped.

Other questions include those interrogating the propriety of the woman having been where she was when the crime took place, for what was she expecting would happen?

Or whether the woman is even telling the truth— whether it was actually a case of consensual sex that the woman came to regret after the fact.

According to Wikipedia, rape culture is defined as,

A sociological concept used to describe a setting in which rape is pervasive and normalized due to societal attitudes about gender and sexuality.  Behaviors commonly associated with rape culture include victim blaming, slut-shaming, sexual objectification, trivializing rape, denial of widespread rape, refusing to acknowledge the harm caused by some forms of sexual violence, or some combination of these.

It’s a well-known saying that those who don’t study history are destined to repeat it.

Sometimes, though, rather than revived and reiterated, the issue in question never actually becomes a part of history, for the time being instead maintained in a continuous line of practice from antiquity to the modern day.

A/N: This will be my last Medieval Mondays post for some time.  I still plan to write about medieval women and their role in society, although this won’t be until my medieval historical WIP is near to publication.  Until then, thanks for following this series for the past three years, and if you missed any posts along the way, you can catch up on the entire Medieval Mondays series.