Getting married in the medieval times was a complicated business.

On the one hand, it seemed straightforward enough – far less complicated than today:

However, this isn’t to say marriage in the Middle Ages was bereft of complications, was universally desired and desirable, nor was never, at times, morally suspect by contemporary standards.

In a medieval arrangement alone, long before the point of “I do”, there was a lot could go wrong.

(Actually, it was “I will” that was said during the climactic moment of the ceremony, but I’ll write more about the nuts and bolts process of being joined in matrimony next month.)

The challenges people often faced while contracting a marriage are as foreign to modern western society as the ethos of medieval marriage itself.  According to Marty Williams and Anne Echols, authors of Between Pit and Pedestal: Women in the Middle Ages:

For the nobility in particular, these material advantages were frequently those that would lead to an increase in land holdings and/or noble rank.

Frances and Joseph Gies, authors of Women in the Middle Ages, explain the thought process that went into contracting a favourable marriage:

In the case of marrying off a son, the best course was to shop for an heiress, and failing that, a handsome dowry; in marrying off a daughter, the aim was an optimum trade-off of dowry and dower, with any debit made up by social gain. (p. 223)

Of the three additional “decent” motives appended to the list in the 12th century – (3) reconciliation of enemies, (4) money, and (5) beauty – only the latter alludes to something approximating emotional attachment.

This demand for a quality noble spouse that could bring a family material gain often resulted in a few problems.

Firstly, there was the fact that noblewomen were not meant to be “disparaged” – that is, married to a man of seriously lower rank – for this would diminish her family’s noble lineage and was even viewed as an offence to God.

As a result of this, there were only ever so many marital prospects who existed at the right social level at the right time.  This, in turn, often led to a second problem – namely, increased pressure for children to be wed at younger and younger ages.

The canonical ages for marriage in the Middle Ages was 12 for girls and 14 for boys (the accepted ages of puberty).  In practice, though, children were often married or betrothed (which could legally occur from age 7 onwards) much earlier than decreed.

Because love wasn’t a motivation for marriage, the age difference between both partners was often very large indeed.

(Usually in these cases, the female was the younger of the two since, as discussed in my previous post about the lives of different types of medieval people, it often took men who were not heirs considerable time to accumulate sufficient status and wherewithal to get married.)

Past present and future

The marrying off of children that were too young was often done in secret to prevent people knowing the family had flouted the decree of the Church.

Secret marriages (referred to in Church parlance as clandestine marriages) occurred in contrast to public weddings before witnesses, which was the proper was for people to marry.

And while a clandestine marriage might be grudgingly accepted among people old enough to feel marital affection for each other, among parties too young to fully participate, it ran counter to the ecclesiastical notion that marriages should be entered with the consent of both partners.

In the book Marriage and the Family in the Middle Ages, Frances and Joseph Gies quote Gratian, a 12th century canon lawyer who tackled many of the controversial issues surrounding marriage in his vast canon text  known colloquially as Decretum Gratiani (Gratian’s Decretum):

A father’s oath cannot compel a girl to marry one to whom she had never assented. (p. 138).

The Gies go on to explain that, “Consent, in Gratian’s eyes, was not only indispensable to a valid marriage, it was the sole essential that could not be omitted.” (p. 138)

This issue of consent became a significant point of debate in the 12th century, for it raised uncertainties related to the validity of prior vs. current marriage contracts, or if one spouse died while both were still children.

The solution to these questions eventually came from Peter Lombard, a 12th century bishop of Paris and doctor of theology, who advanced the theory of present consent to marriage.

According to the Gies,

The consent recorded in the betrothal agreement he found too tentative, amounting only to “words of the future” (verba de future).  For a real marriage, legally uncontestable, the couple must pronounce “words of the present” (verba de praesenti), words that stated explicitly that they took each other, starting at that moment, as man and wife. (p. 139).

The Gies go on the explain,

The final problem resulting from the quest for strong material gain in marriage arose from the Church’s restriction surrounding consanguinity, or the medieval concept of incest. 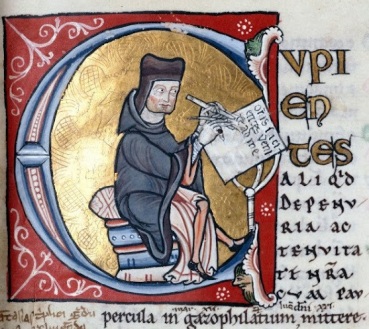 Prior to the early 13th century, it was forbidden a person to wed anyone to whom they were related within seven degrees.

Biologically, this equated to no one with whom they had a great-great-grandparent in common.  However, the consanguinity prohibition also applied to kin by marriage and spiritual kin (godparents and their relatives), even though no biological relation would exist among such people.

(For example, a person could marry neither the birth sibling of his/her brother- or sister-in-law, the child of one’s godparent, nor even a distant cousin by marriage unless that distance was seven degrees or greater).

A couple of unsubstantiated theories as to the Church’s reasoning behind this impediment to marriage include a deliberate strategy to restrict the nobility’s ability to produce heirs (thereby causing their estates to be bequeathed to the Church), and to prevent rich and powerful men from collecting or retaining more than their share of women.

Regardless, given the extreme relatedness among the relatively small noble class, the impediment often made finding a non-consanguineous spouse impossible, thereby requiring a (costly) dispensation from the Pope for the marriage to proceed.

At the same time, people often married within the prohibited degrees unknowingly, which might later call the validity of the marriage into question.

This questionable validity, at times intentionally unearthed by genealogists, often later became a convenient means for ending a marriage gone stale (the topic of a forthcoming Medieval Mondays post).

Most nobles, however, wished for no such discovery.  The consanguinity prohibition was just a frustration alone the already challenging road to finding a fitting spouse – one that finally hindered enough people for the forbidden degrees to be summarily reduced from seven to four during the Fourth Lateran Council of 1215.