I first began this series on medieval food by questioning what sort of experience one would have if transported back in time to a 13th century dinner table.

The time has now come to take a seat at said table and finish finding out.

The very first point of difference one might encounter relates to the time of day “dinner” was actually served.  One might expect that turning up anywhere between 6:00 and 8:00pm as is common for modern dinners (particularly in North America) would also apply to the 13th century.

Not so, for “dinner” in both England and France was the midday meal.  Time-wise, medieval dinner corresponds better with modern lunch, for all that it started much earlier, around 10am.

That said, menu-wise, medieval dinner was more like modern dinner, for it was a rather grand, sumptuous, two-hour affair – according to Margaret Wade Labarge, author of Mistress, Maids and Men: Baronial Life in the Thirteenth Century,

Meals took place in the great hall (the large, open, high-ceilinged room with the dais and the lord and lady’s thrones), which would be set up with benches and trestle tables that were dismantled between meals.

One table (the high table) was placed horizontally atop the dais, perpendicular to the various lower tables situated on the floor.  The high table is where the lord, lady, and family of the household took meals; it was also where important guests – which noble houses almost always hosted – would be seated.

(Just how important a particular guest was could be marked by the number of spaces removed his/her chair was from that of the lord’s.)

Regardless of where one sat, however, certain mealtime customs remained the same.  All tables would be spread with clean tablecloths and set with spoons, salt cellars (containers that held salt), cups, and shallow, silver-rimmed wooden bowls called mazers (although the dishes at the high table would likely be more expensive – silver compared to wood and earthenware of the lower tables – as a mark of wealth and prestige).

According to Joseph and Frances Gies, authors of Life in a Medieval Castle,

Meals were announced by a horn blown to signal time for washing hands.  Servants with ewers, basins, and towels attended the guests. (p.114).

Servants than brought out various entrees on platters or in bowls, however diners ate not from plates but a trencher (also called a manchet), which was a thick slice of day-old bread. 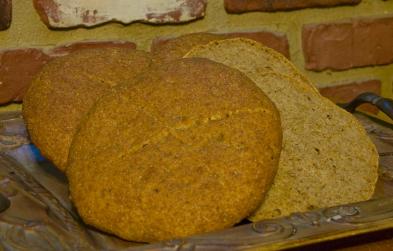 Each person did not get their own trencher; rather, one was shared between two people.  Custom dictated that the lower-ranked, younger, and/or male of each pair assisted the higher-ranked, older, and/or female throughout the entire meal by breaking the bread, cutting the meat, and passing the cup of wine or ale that was also shared.

Dishes were served first to the high table before being distributed among the lesser diners, it being a sign of particular favour to receive one of the lord’s dishes specifically sent one’s way.

Soup was eaten by spooning the solid parts and slurping the broth.  Meat was cut up with a knife (everyone carried their own, which hung sheathed from one’s girdle (i.e. belt) when not in use) and eaten with the fingers.

Stress was laid on keeping hands and nails scrupulously clean, wiping spoon and knife after use, wiping the mouth before drinking, and not dipping meat in the salt dish. (p.116).

Equally frowned upon were the following:

Beyond these rather basic and surprisingly modern injunctions, rules and ceremony marked every other part of meals as well, including the laying of the tablecloths, the cutting of trenchers, the carving of meat, the holding and passing of a shared cup, what one should do upon spotting dirt or flies in the food (answer: say nothing), and the expected behaviour of all diners (answer: according to Labarge, “pleasant and gay” (p.124), particularly the lord of the castle).

Dinner usually comprised two or three courses, each containing several different dishes that all repeated the same type of food save the very last course – often called the issue – which consisted of fruit, nuts, and sweetmeats (i.e. confections).

Supper, on the other hand – which took place after the work day had ended, between about 4:00 and 6:00pm – was a much more casual meal and included only a few light dishes and then cheese.

Breakfast (usually bread and ale or watered wine consumed after morning mass) was not a meal for which the whole household gathered together.  Nor were informal “rere suppers” – late-night second suppers – which moralists condemned as promoting gluttony, lechery, and waste.

During dinner, while still eating, diners also enjoyed entertainment, both the sotelties (the edible, between-course diversions discussed in the previous medieval food post) and whatever minstrels or jesters the lord had in employ to provide music, stories and/or jokes.

After the meal was complete and the leftover food removed (much of which, particularly the trenchers, would be given to the poor), everyone washed their hands again, the tables and benches were cleared away, and the entertainment usually continued.

When the meal was over, one of the guests might regale the company with a song; many a knight and baron composed songs in the tradition of the trouvères[.]  They might be accompanied by the harp, the lute, or the viele, ancestor of the violin. (p. 118). 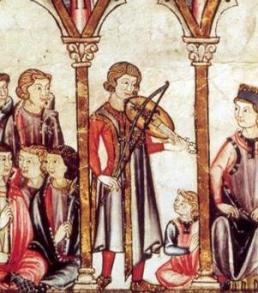 Other entertainments comprised any of the following,