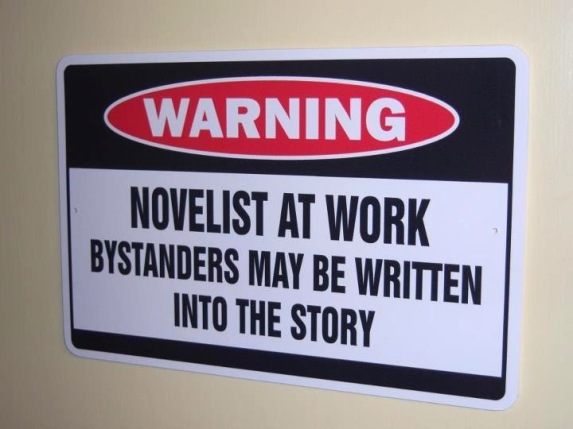 Most writers, I’m sure, have heard tell of characters who seemingly develop “minds of their own” and “take over”  the stories they’re part of.

Maybe it’s happened to you.

Whether or not this phenomenon even truly exists was the subject of the second-most contentious discussion my writing group has ever had.

(The most contentious, unsurprisingly, concerned plotting vs. pantsing.  But that’s a story for another day.)

One writer from my group absolutely believed that characters can come to life, and that them doing so is a quasi-spiritual experience for the writer – a channeling of the divine, uncontrollable inspiration that exists all around us.

A writing of the story through us rather than by us.

Meanwhile, another writer – one more pragmatic and given to rational explanations after my own heart – insisted that a writer is never not in control of his/her characters.  That through having written about them for 300+ pages merely results in the writer coming to understand their motivations better.

No divine inspiration; no whispers from the ethers.  Just an instinctive understanding of how they’d truly react, just like with people you know well in real life.

Surprisingly, I found I didn’t totally agree with it.

I didn’t agree because I have had the experience of a character – the main character of my WIP – taking over.

And while what she did seems logical now considering all I’d written leading up to it, in the moment, it brought me up short, and really did feel otherworldly and inspired by forces beyond myself.  Even if only a little.

In the end, I decided I didn’t really care about attribution – that the how of a character developing self-awareness was less important than the fact that it occurs at all.

For it’s an awe-inspiring experience, after spending so much time contriving and manipulating a character’s actions and reactions, for him/her to suddenly become an active player in  his/her own life.

Plus, it only seems fair.

On this subject of characters, I’ve been invited by my blogging buddy and literary sparring partner, Eric John Baker, to participate in the Meet My Character Blog Tour.

The purpose of this tour is answer seven questions to introduce a character from one’s new, upcoming, or in-progress novel.

The Hostage, by Edmund Leighton

1) What is the name of your character? Is he/she fictional or a historic person?

My character is Aline Meunier de Galleur.  This is a name that reveals both her family’s humble origins – meunier is French for “miller” (for all that medieval millers were relatively prosperous peasants in being freeborn rather than serfs/villeins) – and its subsequent rise to nobility (de Galleur = “of Galleur”).

That said, Aline’s father, despite the importance of his job, has only risen to the rank of impoverished knight – the lowest possible position within the social hierarchy that’s still technically noble – rather than a great baron or earl and direct vassal of the king.

Aline is a fictional character set in a historical time period and begins the story at age 15.

2) When and where is the story set?

The story is set in medieval England in the early thirteenth century, mainly in the Midlands and a bit in Yorkshire.

3) What should we know about him/her? 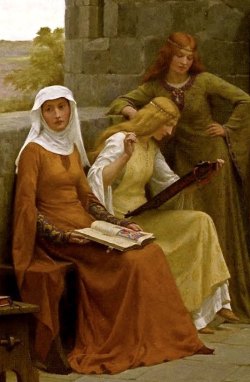 Aline is a proper medieval lady in every regard.  She lives a life dominated by men as one would expect from that era.  Yet she also has all a woman’s usual responsibilities for managing her family’s household that one might not be aware of.

I use the above painting to represent her because it well illustrates the distinction between her and her two sisters. Unlike either of them, Aline always conducts herself with propriety (including always wearing a veil despite being unmarried and thus under no strict obligation to keep her head covered).

That said, in carrying out her work – particularly in helping her father perform his duties to his liege and in trying to improve her family’s social standing – she employs great creativity, cunning, and political manoeuvring within her small sphere of influence, and wields her politesse like a weapon.

4) What is the main conflict? What messes up his/her life?

Her mother died giving birth to her, for which her father blames and despises her.  He is physically and emotionally abusive towards her, and has made no provisions for her future (neither a dowry nor any effort to find her a suitable husband).

5) What is the personal goal of the character?

Aline’s deep-down inner goal is to earn her father’s love and admiration.

However, after one beating too many, her immediate goal becomes to break free from him and plan her own future, which she does by accepting a secret job helping a baron succeed his deceased father amidst threats from rival claimants.

This job proves a far greater test of skills than she imagined, elevating her to new heights of political chicanery, to witchery, to emotional instability, and to her most bold and treacherous strategy ever.

6) Is there a working title for this novel, and can we read more about it?

I won’t tell working title is until the story’s finished because it feels too unlucky.  Neither my best friend nor my mother know it.

I’ll continue to blog about my WIP.  In particular, read any post tagged “WIP plot summary” as well as my “About my novel-in-progress” page.

7) When can we expect the book to be published?

If they so desire to participate, I’m tagging Roy McCarthy and Alicia Butcher Ehrhardt

9 thoughts on “Are Characters Born or Made? (The “Meet My Character” Blog Tour)”