(Or, Why I Can’t Write in Coffee Shops, in a series of confessions) 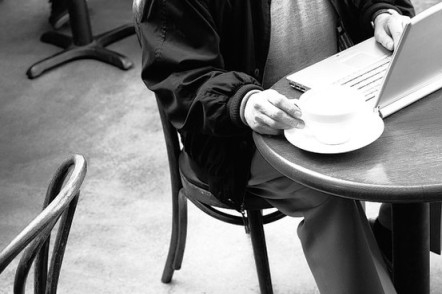 There are only two places that I ever do any writing:

As both of these pieces of furniture are in my apartment, I guess, technically, they count as only one writing place.

Allow me to start again:

There is only one place that I’ll ever do any writing….

This is not to say I’ll only take writing notes at home.  Rather, I’ve done this at work, on transit, on the sidewalk, in the grocery line, on my bike (not while in motion, of course; safety first), and a multitude of other locales.  Indeed, it’s my willingness note-write anywhere (and everywhere) that allows me to write-write anything at all.

But of that write-writing – the actual construction of sentences and paragraphs, foreshadowing and figurative speech – at my humble abode is the only place I can make the magic happen.

Which I didn’t always….

“Bean” around the neighbourhood

I once had the notion to try writing in coffee shops.  This, to me, seemed a venerable tradition of the written word – to sit in a local café with a #3 pencil in my right hand poised above a Moleskine notebook and a frothy latte at my left, the fact that I haven’t handwritten a story since 2000 and haven’t liked coffee since ever notwithstanding.

I could instead bring along my laptop and drink herbal tea: the main point was that writing in coffee shops would get me out of the house.  It would allow me to be seen by others as the writer that I am, perhaps enabling me to connect with literary peers.

It would even allow me to see more of the neighbourhood, for I live near Vancouver’s trendy Main Street, in the heart of hipster-ville.  If there’s one thing hipsters un-ironically love, it’s coffee.

Main Street is a coffee-drinker’s paradise with a java bar on the corner of every other block.  I’d be able to hit up a different spot every day for at least two weeks.

But alas, my efforts to take my writing on the road were met with bitter failure.  For coffee shops, sadly, contain an excess of that which makes my endeavours to unleash a story quite impossible.

The thing they actually have too much of is people.

Bless me Father, for I have sinned

An aside: Where I work, my cubicle is situated such that my back is opposite an internal meeting room that can be used by any of the 50-60 employees from any of the 5-7 departments that share the same floor as my department.

After having held my job for three years, all my office mates have learned that upon entering the meeting room, they must immediately close the door behind them before commencing their discussion or else they’ll receive a nagging request from me to do so.

I have a confession to make.

Confession #1: It’s not my being bothered by the noise of their conversations that drives me to be so pushy about closing the door.

Don’t get me wrong: the noise of their conversations does bother me.  I like to have a quiet environment while I’m trying to work, but I can easily achieve that by turning on my iPod, which I often do.

The reason I need the door shut is because, if they leave it open, I will listen to what they’re talking about.

The stuff that great stories are made of

In my very first Distractions & Subtractions post, I wrote that one of the personality traits that helps optimize me as a writer is the fact that I’m “curious about people’s inner lives”.

Confession #2: This is actually a euphemism for “nosy as sh*t”.

I do like people.  Really, I do.  But a lot of the time, I find what people say and do when they know you’re paying attention to be a tad dull.  This information is always scripted, or at the very least filtered through any number of lenses, not the least of which is how they think their words/actions will be received.

However, what people say/do when they think no one (or no one else) is watching?  I eat that stuff up.  I can’t get enough of it.

I’m totally the type to eavesdrop, peek through keyholes, open medicine cabinets, watch over people’s shoulders while they’re texting on a crowded bus, and peer into my neighbour’s open patio door to see his pet iguana*.  People’s secret lives are just endlessly fascinating to me.  I become transfixed by them.

Which is why the meeting room door needs to be closed immediately.  Which is why I can’t concentrate on writing in coffee shops with so many people around.  Because if there’s a conversation going on that I’m not meant to hear, if I’m actually able to physically hear it, I want to.

Secrets make people seem so much more real and relatable.  It’s the stuff that great stories are made of.

I’m known to friends and coworkers both as a listener.  My hearing is one of my strongest senses.  I can pick out whispered words from across the room – I’m drawn to them like a bloodhound on a scent – and I’m very good at piecing together the topic of an overheard conversation with just a few key words.

There are a lot of people and a lot of talking in coffee shops.

Alas, great multitasker I may be, I unfortunately am unable to listen and write/work at the same time.

The sky is not falling, but…

“But your iPod!” some might say.  “You use it to block out noise at work; you can do so at a coffee shop as well.”

Well, yes, but actually, no.  Because…

Confession #3: I am a ~wee~ bit of a paranoid sort of person.

Not in an annoying, persistent, Chicken-Little-the-sky-is-falling-esque sort of way (at least I don’t think so).  Not bomb-shelter paranoid.  And yet, I have more than once spoken the words “When the apocalypse happens” in polite company with a perfectly straight face.

I am the only member of my team at work who attended the free Earthquake Preparedness training seminar, and actually have in my apartment almost all the items experts recommend one stock in case of The Big One – everything except the recommended supply of potable water.  But, I have a Plan for finding water if need be in the meantime.

I don’t actually like the word “paranoid”.  I prefer to think of myself as a “survivalist”, or in my more grandiloquent moments, a “disaster theorist”.

(Note: this tendency of mine to postulate what could go wrong and expect the unexpected is something I’m frequently called upon to employ at work, so you can blame them for giving me positive reinforcement.)

I always make a point of carrying certain “useful” items on my person whenever I leave the house, for example…

…and am always aware of my surroundings and the potential avenues from which danger could arise.

I just realized I don’t currently carry a source of fire. I’ll have to do something about that.

Because my hearing is so good, I often hear danger before I see it: e.g. squealing car tires; footsteps coming up fast from behind; raised voices; alarms and sirens, even from a long way off.

As such, I don’t like to wear headphones when I’m out of doors or in strange places.

This makes me something of an anomaly in Vancouver – indeed, in many urban centers – where little white earbuds are as ubiquitous as …  as coffee shops. (I sense myself rounding the final arc of a circle here.)

Pretty much the only places I listen to music through headphones are at work and at the gym, an even then, the volume is low enough that I can still hear a bit of what’s going on around me.  You’ll never catch me sitting at the back of a bus and sharing my latest playlist with everyone else, whether they like my taste in tunes or not.

Because I’m too paranoid  cautious to dampen my awareness of my surroundings like that.  Because when shit goes down (note my use of “when” rather than “if”), I want to be able to respond to it immediately.

So no headphones in coffee shops.

The writing Subtraction Hall of Fame

Over the course of writing these Distractions & Subtractions posts, I’ve inadvertently devised a sort of Subtractions Hall of Fame:

This current subtraction would thus be categorized as the subtraction that bothers me the least.

Since I live alone, there is no disruptive talking; all my reference books are here; I can listen to music through headphones without worry (not that I do; I’ve got awesome Harmon Kardon speakers); I’m already conditioned to work efficiently here, more readily able to enter that altered state that characterizes the writing “zone” for me; and should I grow tired, I can easily take a little nap, especially when I’m already lying on my bed.

As I wrote in a previous post, home really is the best place for me to do my writing.

Confession #4: I sometimes worry about how I look when in public.

Within the throes of the “writing zone” would classify as one of those times.  For all I know, I make asinine faces while I’m writing.

There’s no way I want to subject people to that.  What might they think of me then?

Coming up next week: a Distractions & Subtractions post for poet/ranter Rule of Stupid