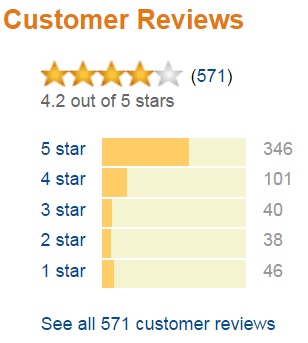 Ever since my very first Amazon book purchase on October 25, 2002, I’ve never stopped debating myself on the value of customer book reviews.

(If you ever want to enjoy a nostalgia-filled blast through the past, go through your Amazon purchase history order by order, year by year, back to the very beginning.)

On the one hand, professional reviewers aren’t always giving in-depth reviews of the books I read or want to read.  As well, there are way more customer reviewers out there; the law of averages alone suggests I’m more likely to share tastes with an amateur than a pro, many of whom fall into more similar social demographics to each other than to me.

That said, the reviews on Amazon and Goodreads aren’t necessarily as democratic as one might believe – not the by-the-people, for-the-people, objective measure of artistic and commercial merit one might hope for.

Reviews are bought and sold: there are actually people out there who supplement their living by writing customer reviews – either voracious readers or page-skimming bullshitters who promise a comprehensive five-star review for a price.

Meanwhile, those who buy reviews often just consider it another marketing strategy, like banner ads and social media blasts – something to help boost their book’s visibility on Amazon in hopes of reaching a critical mass of interest and sales.

As well, sometimes an author has hoards of fangirls and fanboys who worship the ground s/he walks in and, whether deliberately or not, skew the author’s rankings with scores of five-star reviews.

Reviewing to the extreme

I could always just not read reviews at all if I find them so untrustworthy.  But I’m the type of person who doesn’t really like surprises.  I’ll almost never go into a book blind, and it’s usually not enough to just read the blurb.  I want at least some idea of how people have received the book before committing to giving it a try.

I only have time to read about 12 books a year, so I want to choose good ones.  I dislike having to abandon a book because, as a writer, it feels disloyal to the author.  It also make me feel like a quitter and worried that I’ve missed out on something amazing – that if I’d just stuck with it, it might’ve gotten better.

As a result, I’ve changed my review-reading habits entirely.

For one, I no longer read five-star reviews.

Why, specifically, they enjoyed it doesn’t even matter.  I already know what people consider good storytelling and believe there’s a lot less disagreement about that than what’s deemed bad.

(I do, however, make note of the number of five-star reviews compared to that of total reviews, for that ratio is valuable and informative.)

Neither do I read one-star reviews, which are often either mean-spirited – speaking less to the story itself and more to the perceived deficiencies of the book’s author or publisher – or among the shortest of reviews, and therefore useless in motivating an informed decision.

One-star reviews also run counter to my personal philosophy of books and writing in general.  I’ve never in my life given a one-star review.  As a writer as well as a reader, I know the difficulty that goes into creating a novel – the crafting a story essentially out of thin air.

I have no problem saying I didn’t like some aspect of a book or even the entire story premise (I have given two-star reviews).  But I don’t believe any book is so awful as to have no redeeming qualities.

An example of this is the Twilight series, which many people love to hate.  Although I didn’t actually read those books, I did watch all five movies and write a post about what’s good about Twilight.  I haven’t yet read Fifty Shades of Grey, but when I do (it’s sitting on my bookshelf as I write this), I’m sure I can find something positive about it as well.

I subscribe to the Second Law of Library Science (and how awesome is it that Library Science has laws?), which states that “Every reader his/her book.”  That is to say that even if a given book isn’t completely to my taste, that neither makes it terrible nor means there’s nothing about it that I can’t enjoy or be inspired by as a writer.

Because of all this, the reviews I read most often and pay the most attention to are the three-star reviews.

Three-star reviews are like the English Lit essays of customer review world.  In being neither a gushing endorsement nor a scathing denunciation, a three-star ranking requires some explanation – some evidence to back up the reviewer’s thesis statement – especially for the elements s/he didn’t like.

In a particularly well-written three-star review, you get to learn not only why the reviewer subtracted stars (the reasons for which can be as diverse as they are and instructive), but a bit about the reviewer as a reader overall.  This reader profile, if similar enough to  my own reader profile, makes it almost like reading a review I myself wrote.

And who knows better what type of book I’ll like than me.

Do you read book reviews on Amazon and Goodreads?  Do you trust them?  Do you have any special review-reading habits?  Tell me about it in the comments.