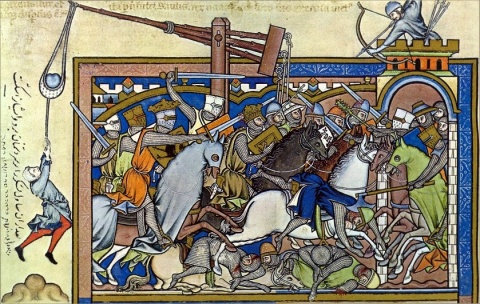 If there’s one aspect of medieval knights that tends to be grossly exaggerated in mainstream media, it’s the amount of time they spent in open warfare.

To begin with, as previously discussed in my post on the feudal system, a “knight’s fee”—that is, the assorted obligations a vassal owed his lord in exchange for the land he lived upon—was both passive and active in nature.

END_OF_DOCUMENT_TOKEN_TO_BE_REPLACED

Remnants of Peveril Castle’s keep: the basement as viewed from the upper level

Peveril Castle, located in Derbyshire, England – the site where much of my novel-in-progress takes place – had one of the smallest examples of a castle keep in England.

As shown in the artist’s rendition to the right, it contained only two rooms – a principal chamber and a basement underneath that was likely used for storage and accessed via a spiral staircase.

The keep also had a latrine, a wall cupboard, and a large window looking out over the rest of the castle and the surrounding Hope Valley, but it didn’t have a fireplace, any food service rooms, or even a well.

END_OF_DOCUMENT_TOKEN_TO_BE_REPLACED

Remnants of the keep and curtain wall of Peveril Castle in Derbyshire, England

As a child, I used to like drawing pictures of medieval castles.

These drawings always took a similar form: a large square in the middle of the paper, two taller turrets on either side, and a wall that extended the remaining length of the page on either side.  I even owned a stencil that had a guide for making square waves that I used on the upper edges of each part of the picture.

For a frontal, ground level representation by an eight-year-old, I actually think I did pretty well, having depicted the three key components of the average medieval English castle: the keep, the tower, and the curtain wall.