If there’s one aspect of medieval knights that tends to be grossly exaggerated in mainstream media, it’s the amount of time they spent in open warfare.

To begin with, as previously discussed in my post on the feudal system, a “knight’s fee”—that is, the assorted obligations a vassal owed his lord in exchange for the land he lived upon—was both passive and active in nature.

It was under the heading of active duties, and further classified as “aid” (as opposed to “counsel”), that fighting with full equipment—either alone or with a prescribed number of companions—fell.  Referred to as ost or “host”, this service typically lasted 40 days a year.

However, knights and barons often did their level best to avoid going to war so as not to leave their estates, the management of which demanded much of their spare time.

Even when 13th century English knights did go to war, their manner of fighting was considerably different from what’s often depicted in Hollywood movies.

According to Joseph and Frances Gies, authors of Life in a Medieval Castle,

They go on to explain that warfare in medieval England wasn’t as incessant as even some earlier historians have portrayed it:

The motte-and-bailey stronghold of the ninth and tenth centuries was frequently embroiled, either with Viking, Saracen, and Hungarian marauders or with neighbouring barons, but by the eleventh century the marauders had been discouraged and private warfare on the wane.  In England it was outlawed by William the Conqueror and effectively suppressed by his successors. (p. 186)

War, when it did break out, both in England and overseas, typically involved laying siege to a castle.  Indeed, many castles were intentionally sited to bar routes of invasion, and were major military objectives in their own right.

Castles, as I’ve previously written, were solidly constructed with defence in mind.

They contained numerous features to help repel enemies, including a gatehouse, a portcullis, a moat, towers and battlements built into the castle’s curtain wall, and a keep to retreat to as a last line of defence. 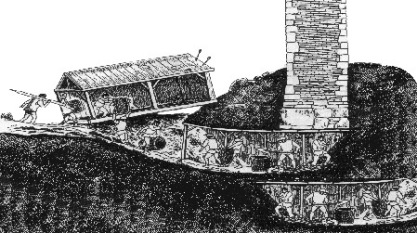 In order to successfully capture a castle, the besiegers had to exploit what few vulnerable points 12th and 13th century castles did possess.

Castles not built on solid rock commonly fell prey to sapping—that is they were undermined by way of a tunnel dug beneath a corner or a tower of the curtain wall.

As the sappers advanced, they braced the tunnel roof with heavy timbers.  These they eventually set ablaze to collapse the earth and masonry above once the tunnel reached a point directly under the wall.

In 1215, when King John of England laid siege to Rochester Castle, after six weeks of digging by his sappers, the king commanded he be sent “with all speed by day and night forty of the fattest pigs of the sort least good for eating to bring fire beneath the tower.” (Gies and Gies p.190-1)

For castles that did possess a solid rock foundation, the attackers’ only options were to either go over the wall or to batter part of it down.

The mobile assault tower—usually called a cat—was designed to provide both cover and height to attackers as they stormed the walls.   The Gieses write,

The assault tower, containing both archers and assault troops to engage the defenders hand-to-hand, could then be wheeled forward to the castle wall.  A large besieging army could build and man several such towers and by attacking different points of the wall exploit numerical advantage. (p. 192)

The cat could also be used to shield men working a battering ram, for all that the most powerful castles of the High Middle Ages rarely had their gates breached by ramming.

Neither were castles commonly breached by any of the stone-throwing siege engines that were utilized during the medieval times.  This included tension and torsion engines like the catapult, or those driven by a counterweight, like the trebuchet.

A 15th century depiction of a trebuchet

This isn’t to say it couldn’t be done, especially with the trebuchet, the effectiveness of which the Gieses call “formidable” due to its ability to hit the same spot repeatedly with precision.  However, the success of stone-throwers ultimately depended on the height and thickness of the walls they were attacking.

As the use of stone-throwers grew more common and their design more sophisticated, this resulted in the construction of heavier castle walls, such as at Windsor Castle, with its walls that were 24 feet thick.

Besiegers could also attempt to overtake a castle by way of a ruse that helped a small party gain entry. These could include the following:

Notwithstanding the besiegers’ various methods of attack, during a 13th century siege, the advantage almost always lie to those defending the castle.  According to the Gieses,

Some castles kept a year’s supply of food or even more on hand, and the relatively small size of a thirteenth-century garrison often meant that in a prolonged siege, the assailants rather than the besieged were confronted with supply problems.  A garrison of sixty men could hold out against an attacking force ten times its number, and feeding sixty men from a well-stocked granary supplemented by cattle, pigs, and chickens brought in at the enemy’s approach might be far easier than feeding 600 men from a war-ravaged countryside. (p. 189)

Beyond simply waiting out a siege, the castle garrison had a few means of defending itself.

From the advantageous height of 40+ feet above the ground, the castle defenders were able to thwart the approach of the besiegers by way of,

If an advantageous moment presented itself, the defenders could also sally out to attack the besiegers directly, returning to the safety of the castle walls afterward.  In the first place, the castle was brought to England to serve as a base of operation for subduing the countryside.  Often, it was these same offensive capabilities of a given castle that provoked a siege

A siege ended when either the attackers gave up and withdrew or the defenders surrendered.

The treatment received by a surrendering garrison depended on the reason for the siege and the status of the defender.  Knights were usually spared in order to be ransomed, however foot soldiers might be murdered or mutilated.

At times though, the entire garrison might be spared and granted their freedom as a condition of a truce between attackers and defenders.

The Gieses explain that truces were frequent outcomes of sieges, and that the commonness of sieges in general was responsible for the stop-and-go, on-again-off-again pattern of warfare that was characteristic of the medieval times.

As an example of this, they indicate that in the war between Prince Louis of France and Henry III of England, at least five truces were made between October 1216 and February 1217, all related to sieges. (pp. 198-9)

But a truce, they go on to explain, was yet another means by which besiegers could overtake a castle:

A shrewd commander besieging a castle might take advantage of a truce to plant a spy or bribe a member of the garrison.  He might obtain valuable information, for example on the castle’s supplies, or he might arrange for a postern to be opened at midnight or a rampart to be left unguarded. (p. 190)