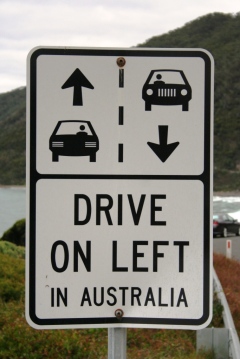 I have a good friend from Australia.

(I swear, this isn’t the start of a limerick.)

My Aussie friend – let’s call her NR – became a friend having been my roommate here in Vancouver for almost two years.  During those years, we spend a tremendous amount of time together, talking about everything under the sun, singing songs, making jokes, arguing, and telling each other how much we love each other.

I’ve already confessed in a previous post to having a penchant for trying to mimic accents and foreign turns of phrase.  Indeed, NR says that having me around is sometimes like an annoying little echo aping her alternate pronunciations –

– not to mention her non-North American expressions, such as “reckon” (to perceive or imagine something), “crook” (ill or unwell), “capsicum” (a bell pepper), and my personal favourite, “rear-vision mirror” (the rear-view mirror in a car, which, when spoken in the typical Aussie cadence actually comes out sounding more like “revision mirror”.)

This is all fun and games for me, and NR as well I’m fairly certain, for it’s practically a national pastime among the Australians to “take the piss out of” (tease or make fun of) friends and likewise be a good sport when others take the piss out of you.

However, beyond mere amusement, my interactions with NR have led to think a lot about dialects in general, and how that effects my writing.  For not only do numerous ones tend to exist within a given language, these dialects also vary across time as well geographical space.

In other words, how do I create effective historical dialogue?

END_OF_DOCUMENT_TOKEN_TO_BE_REPLACED

Two weeks ago, I was sick.

This, for me, is a rare occurrence.  I take my health, fitness, and diet very seriously, and am also just naturally blessed with an ironclad constitution.

As a result, the minor aches, coughs, and sniffles that many people suffer every other month do not afflict me.  I don’t even really get monthly menstrual cramps.

What I do get is one major illness every year to year-and-a-half that takes me down for about a week despite my prideful efforts to fight it.

That’s what this recent illness was: it started off as a sore throat, quickly progressed to a hacking cough, and before I could say, “I’m fine,” I had a full-blown head cold complete with cement-filled sinuses, pounding temples, aching neck, shoulders, back and abs from coughing, throat scratched raw from the same, tiredness, weakness, and about as much air capacity in my lungs as if I were breathing through a straw, particularly when trying to lie in bed.

I was not fine.

And the thing that hurt the most was my ego in having to admit to my malady.

It was a low moment.  So low, in fact, my body became a metaphor for my mental state: bypassing my bed entirely, I spread a blanket on my living room floor, brought my laptop down with me, and searched for something to watch on YouTube to distract me from my misery.