If you were magically transported back to early 13th century England and invited to dinner in a noble household, what sort of experience would await you?

An experience so different, it will be the subject of three separate posts in this blog series, the first of which (today’s) focuses on the raw ingredients of medieval cuisine.

According to Margaret Wade Labarge, author of Mistress, Maids and Men: Baronial Life in the Thirteenth Century,

Much of the organization of any household, medieval or modern, revolves around the problem of providing the necessary food.  In the thirteenth century long-range foresight and good planning were particularly necessary for a large household, since supplies often had to be arranged at least a year in advance and the stores available in castle or manor had to be sufficient to feed an ever-fluctuating number of people. (p.71)

In addition to this, the medieval times – like all historical eras prior to the mid-19th century – suffered a key food-related  shortcoming, namely a lack of refrigeration.

As a result, in the 13th century, much of what, when, and how various foods where consumed corresponded to three main food preservations strategies.

A prime example of food that was produced as needed is bread.

Bread was baked daily and was the basis of most meals for both the rich and the poor, the latter of whom may have derived unexpectedly greater health benefits for their bread being darker, more coarse, and less (by medieval standards) refined.

In a similar vein to cooking/baking items fresh, many foods were harvested when needed.

Meat and fish were the next most important elements of a wealthy medieval diet, and where available and permitted, the hunting of deer in the summer and wild boar in winter could provide a substantial amount of a household’s meat.

Domesticated meats, meanwhile – chickens, pigs, cows, and sheep – were often just kept alive near to the kitchen until the cook needed them.

Every medieval household, rich or poor, contained a garden from which a relatively meagre selection of produce were grown: beans, peas, garlic, onions, although the beans and peas were most frequently utilized dried.

(It should be noted that, in addition to bread, all the aforementioned vegetables were basically the sum-total of the regular diet of the poor.)

Noble households would also have orchards from which apples, plums, peaches, and most commonly, pears were grown, although wild fruits, as well as nuts and mushrooms would also be gathered from the forest.

To wash all of the above down, ale – the drink of those who served the nobility (the nobles themselves drank wine) – was also produced as needed on a regular basis.  Interestingly, brewing was performed almost exclusively by either women (alewives) at home or in monastic houses.

With meat playing such a large role in the medieval diet and hunting alone unable to provide all a household’s needs all the time, salting was a very important practice.  Meats were also sometimes smoked, but by far, salting was more common.

In Life in a Medieval Castle, Joseph and Frances Gies explain how this was done:

Salting was done by two methods.  Dry-salting meant burying the meat in a bed of salt pounded to a powder with a mortar and pestle.  Brine-curing consisted of immersing the meat in a strong salt solution.  Before cooking, the salted meat had to be soaked and rinsed. (p.111)

The most commonplace salted foodstuff of all households both great and poor was salted herring.

Fresh herring was a rare delicacy even for the King.  Its salted counterpart, however, was the staple of the menu on all fish (i.e. religious) days: Wednesdays, Fridays, and Saturdays all year round as well as the 40 days of Lent.

The rough, harsh taste of salted herring coupled with Lent’s incredibly long duration no doubt elicited similar complaints during the 13th century as have been recorded by a schoolboy in the 15th: 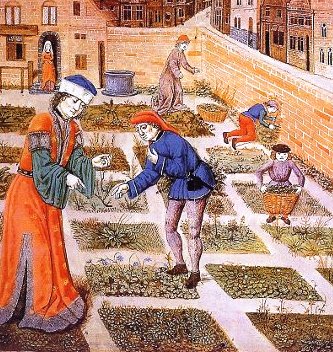 Medieval usage of herbs and spices far exceeded modern use.

They were employed primarily to help disguise the flavour of food that was either previously salted or of dubious freshness, although spices also served as a display of a household’s wealth since the long and arduous spice trade was the only source of the numerous flavours, both exotic and common, that we can today obtain with ease.

From the medieval recipes that have come down to us, it is obvious that the cook used all the available spices freely.  [T]he astonishing number of spices taken for granted in daily living….” (p.94),

although she goes on to speculate that transport, refining, and storage seriously diminished the spices’ quality to the point that large quantities were required for even a moderate result.

The spices in most common use in the 13th century were pepper, ginger, and cinnamon, with occasional use of other such as cloves and galingale (an aromatic root that resembled ginger).

Common herbs, many of which were grown in the garden, included parsley, anise, fennel, cumin, coriander, enormous quantities of mustard, and the monstrously expensive saffron.  The French, apparently more avid gardeners than the English, often also included dittany, hyssop, borage, leek, and porray (a general term for potherbs) in their herb plots.

Other important and imported delicacies were also listed in the spice account, and included rice, almonds, dried fruit, and sugar (which came in a loaf that had to be pounded; honey, which was more commonly used for sweetening, was produced locally).

Since spices were so expensive, they were kept under lock and key and only issued to the cook in the precise amounts he needed at a given time.

A/N: In my remaining two posts on medieval food, I’ll discuss (a) some recipes that resulted from these raw ingredients, (b) the way food was consumed and how meals in general were conducted, and (c) how I’ve made use of all this research in my WIP.