Three versions of Maid Marian (a 13th century character associated with Robin Hood), of which the more authentic outfit is that of the fox.

If there’s one aspect of medieval history I love most, it’s the clothing, especially women’s clothing.

The clothing, incidentally, is one of the aspects Hollywood most often get wrong.

Typically, this occurs through clothing styles from one century being mis-attributing to another.  This despite what author Mary G. Houston writes in Medieval Costume in England and France: The 13th, 14th and 15th Centuries:

What can be more diverse than the noble simplicity of construction and natural silhouette of the thirteenth century, compared with the slender elegance of the fourteenth, and the riot of variety and exaggeration in the fifteenth century. (pp. v-vi)

I can’t entirely blame Hollywood.  It’s not their fault some of the best medieval fodder for movies and shows – e.g. the Norman Conquest; the Anarchy; the Crusades; Magna Carta and the First Barons’ War – occurred early in the four hundred-ish years comprising the Middle Ages.

At that time, people’s fashion sense was neither overly fashionable by modern standards nor particularly memorable.

Many Hollywood movies, when looking to replicate a “medieval” outfit, tend to zero in somewhere around the 15th century.

This trend is particularly pronounced with women’s clothing: the dresses are long, flowing, form-fitting, fairly silky or satiny looking, and kitted out with adornments like buttons, embroidery, gold thread, and a truly architectural wonder of a headdress.

The long and loose of it

Ignoring the fact that such an outfit would only be worn by a noblewoman of substantial wealth (even for middling noblewomen, it would likely be beyond their means), to use it in a show set in, say, the early 13th century when my WIP is set would be to ignore certain facts about medieval clothing design.

For one thing, dressmakers (and I use that term loosely, for reasons I’ll explain shortly) weren’t all that good at making form-fitting clothing.  According to Mary G. Houston,

[W]e may dismiss that cutting-in at the sides which gave a tight but wrinkled body to some of the gowns and tunics of the twelfth and very early thirteenth century, which were tight but did not really fit. (p. 73)

In general, the costumes of [the thirteenth] century are cut on the simplest geometric plans and, except for a few very early examples, there is no attempt to fit the figure as was seen in the twelfth and again in the fourteenth and fifteenth centuries. (p. 1)

This resulted in clothing that tended to be rather shapeless, requiring a belt (in those days called a girdle) to draw in the access hanging material and show some semblance of the wearer’s body shape.

My noncommittal use of “dressmaker” comes not from this penchant for ill-fitting clothing, but the fact that there was no such thing as “dresses” per se in the 13th century.  Neither was a “dress”, as it were, a singular garment to be worn, but rather an ensemble of four key layers.

Men, women, and even children all essentially wore the same thing.  From the inside layer out, this included the following:

All of this, in most cases, would be made of some manner of wool – finer and smoother for the wealthy, coarser for the lower classes.  For children, the clothing was just a smaller, more simplified version of the above. Both men and women wore a girdle, either knotted or fastened with a metal buckle.

The few difference between the clothing of men and women were as follows:

In full colour and under cover 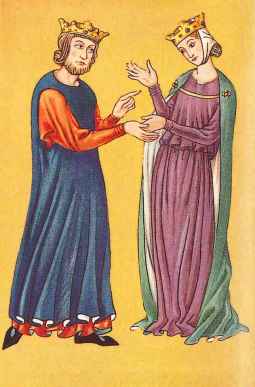 There are two other elements of 13th century dress often missing from Hollywood portrayals – two things common to both men and woman that I pay especial attention to in my writing.

The first is a love of colour.  In Hollywood movies, the clothing of both sexes always follows our modern colour sensibilities: subdued, matching, specifically chosen to complement of complexion and character of the wearer.

In the 13th century, however, bright colours were the norm, both as a status symbol (dyes and materials that held dye the best were expensive) and as a means to brighten up dreary and dimly-lit castles.

According to Margaret Wade Labarge, author of Mistress, Maids and Men: Baronial Life in the Thirteenth Century,

A look at the manuscript illuminations shows the love of colour by both sexes: bright gowns, brilliant mantles and gaudy stockings, all stand out against the dark walls. (p.129)

Larbarge goes on to write that the most common colour for hose included green, blue, and orange.

This is important because the 13th century sense of colour is so different from that of today.  Just as British author L.P. Hartley has stated: “The past is a foreign country: they do things differently there.”

The second consideration is that men and women wore head coverings both indoors and out to protect against cold and drafts.

For men, this was usually a linen coif (a form of skull cap fastened by strings under the chin) and for women, a linen veil and sometimes also a wimple, which covered the neck and went under the chin.

(As mentioned previously, the gravity-defying headdresses became popular towards the end of the 13th century, and well into the 15th century.)

Only a young girl appeared bareheaded.  She could wear her hair long and loose, with perhaps a chaplet of flowers or a gilt circlet as her only adornment. (p.143)