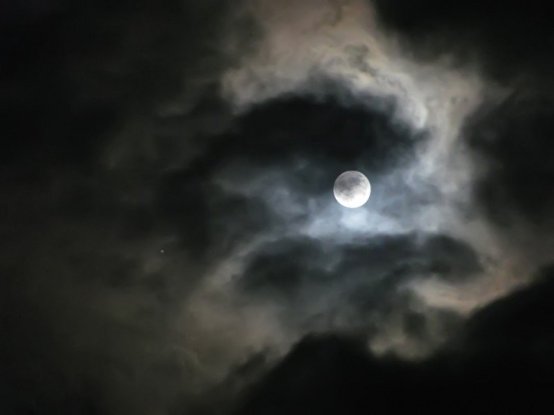 I always wanted to make an aesthetic for my WIP, though I wasn’t sure that I could.

Originally, this was due to my not understanding them as an artform.  I knew they were collages of evocative photos that represents one’s story, and that they’re a common way for writers to discuss and promote their work on social media, particularly Twitter.

But I didn’t understand their underlying artistic theory.  To remedy this, I made a study of them during the 2018 PitchWars pre-submission get-to-know-you period when one of the prompts encouraged writers to share their aesthetics (click the Tweet to see a full thread of my observations).

2) Colour scheme – those with a dominant colour/group of colours seem more moody and cohesive
3) Symmetry vs. asymmetry – both seem equally effective, but perpendicular lines seem to guide the eye along the photos better
than diagonal lines [2/5]

That done, I still didn’t think I could do it, even after further consulting with writing friends about the best websites for finding images and the best app to use for the aesthetic template.

This was because, for me, the hardest part of aesthetic-making wasn’t one that could be taught.  Aesthetics are a beautiful, visual way to communicate the mood and tone of your story.  Some writers even make their aesthetics first—before even writing the story—to help it take shape in their mind, a sort of pictorial form of outlining.

But for someone like me—someone with aphantasia—my desire to do this felt like a form of self-imposed torture.

Blindness of the mind

You may have heard of aphantasia from the various tests for it floating around online.  Simply put, it’s the condition of your “mind’s eye” largely being blind.

Being unable (or at least struggling significantly) to visualize images in your head.

Whenever I take one of those online tests (like the apple test) or am told to picture a dog, or my best friend’s face, or anything, I can’t really do it that well.

I might see individual bits and pieces—my friend’s haircut or the colour of her skin—but nothing resembling her full appearance.

Even with things that I’m intensely familiar with—the family home I grew up in; my desk at the job where I’ve worked for 10 years—the result in my mind, if I’m lucky, will be like a child’s sketch.

Other writers, I’ve heard, struggle to make aesthetics as well.  They struggle to find pictures that best approximate the image in their mind.  That is its own level of mental blindness.  They don’t know what keywords to search when looking.

But I don’t even have an image in my mind—no visualization of my novel in general that I’m trying to match. 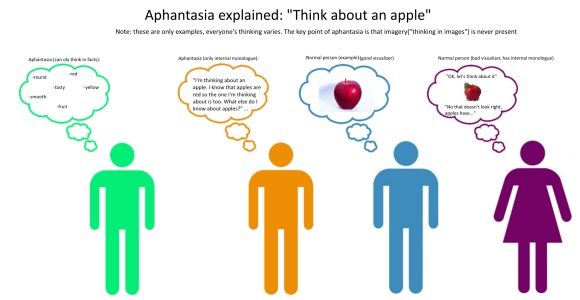 That is level 2 mental blindness there.  And hence why I thought I could never make an aesthetic.  To make something, you need to have some idea of what it should look like, as well as know how to find the various parts for it.

I’m a writer for a reason.  Just like the green person in the graphic, when someone tells me to picture something, what I actually do is call up as many words to describe it as I can think of.  These words have the effect of creating a sense of the thing—its energy rather than it’s appearance.

(Yes, I am entirely aware of how weird and woo-woo that sounds, but there we are.)

I do this in my writing as well.  I don’t see the scene like a movie in my head the way many writers report.  But I can feel it, and thus use as many evocative words and turns of phrase at my disposal to bring the scene to life.

So that’s ultimately what I did.

From pitch to picture

By chance, I happened to be working on the aesthetic of my WIP and pitches for it—specifically Twitter pitches—around the same time (near the start of the COVID-19 lockdown when I was forced to cancel a scheduled trip to visit my family over Easter).

The pitches helped inform the aesthetic tremendously.  It got me thinking about the various aspects of my novel in short descriptions.  I then used these descriptions to brainstorm what a picture representing it would look like—what characteristics it would possess.

These characteristics became my search terms.  For example, one of the descriptions, representing my main character, is “A mistreated girl’s mission to save herself”.

Searching for photos was still a lot of work; there’s so many factors that can make what might seem like a promising picture be unusable (not least because I’m writing historical fiction and therefore don’t want anything that looks obviously contemporary).

Even though I created the aesthetic on Good Friday (April 10), I collected photos (74 in total) from February right up until the night before.

Thankfully, once I actually had something visual to look at, assembly of the aesthetic was fairly straightforward—a couple hours worth of narrowing the 74 down to nine and settling on their best placement based on colour, symmetry, visual flow, plot progression, and when I found myself torn between two options, input from a friend.

Indeed, that part was so easy and enjoyable by comparison, I made two aesthetics—one for my main character… 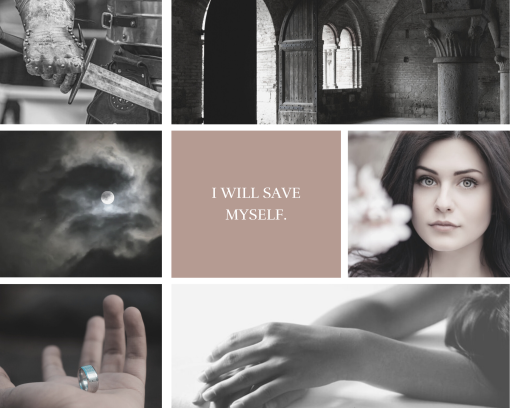 …and one for my WIP overall.

My first ever aesthetic! 🖤

My #HistFic WIP has:

– Medieval court intrigue and succession drama
– A mistreated girl’s mission to save herself
– Hidden rivals + friends with opposing agendas
– An heir in conflict with himself
– A proposal from the right man for the wrong reason pic.twitter.com/grH7GcodTD

Now that I have a solid technique for aesthetic-making, I can see myself (ha!) doing this again for future WIPs.

3 thoughts on “I Made My First Ever Aesthetic! (With No Help From My Mind’s Eye Whatsoever)”