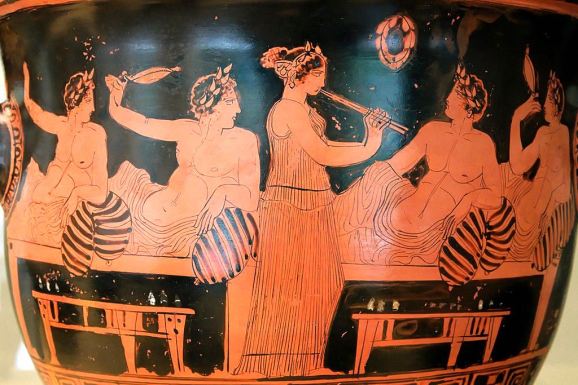 Ancient Greek men at a symposium (being entertained by a female musician) (painted mixing bowl, c. 420 BC)

It took me two whole years, which is at least a year and a half too long.

Ever since I decided my next writing project would be my first (incomplete, shelved) novel – a fantasy – rewritten as historical fiction and set in Ancient Greece, I knew I had to seriously beef up my knowledge of that period in history.

In many ways, this would be me starting from ground zero in my research.

I did learn about Ancient Greece in high school in an honours ancient history class. However, I was far more interested in medieval European history at the time.

I was sorely disappointed this class only covered from prehistoric times up to Ancient Rome.  So much so that I did an independent study on women in medieval England for my final project – the springboard for what years later would become my current WIP – and forgot almost everything I learned about Ancient Greece. 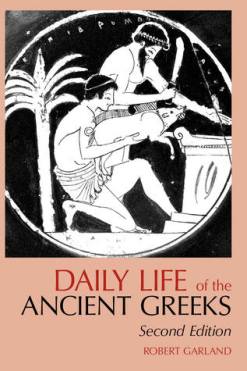 Hence my need to purchase the book Daily Life of the Ancient Greece by Robert Garland – a comprehensive overview of various practical details on Greek life in the ancient times.

A book I then proceeded to not read for an entire year and a half.

This uncharacteristic procrastination was largely out of fear that even after I started learning about the ancient world, I’d be met with a corresponding lack of ideas on the sort of story I wanted to tell.

Thankfully, this has not proven to be the case.  I’ve been reading up a storm and my next novel’s outline* is already 20 pages long.

(*By “outline” I mean what essentially amounts to a bullet-point zero draft of every related idea that comes into my head, complete with some of the worst punctuation you’ve ever seen.)

Garland’s book was the first non-children’s book I read on Ancient Greece in the name of novel research.

At the time I read it, my knowledge on the subject was all but nonexistent, such that every fact came to feel important as a result.  This was especially so because I’d yet to choose a specific historical moment to anchor the events of my story.

That being said, a handful of facts jumped out at me as particularly noteworthy.  This was as much from how unintuitive they seemed to me as from the misrepresentation (or outright erasure) some of them receive in mainstream media.

These facts include the following:

Through my study of 13th century England, including its numerous forms of entertainment (which I’ve written about), I took for granted the fact that Classical Greece – despite existing some 1600 years prior – would offer a comparable array of entertainments for its contemporaries.

Alas, this was apparently not the case.  Garland writes,

When the Greeks wanted to relax at the end of the day, the choices available to them were extremely limited…. There does not seem to have been anything comparable to the local pub or coffee bar. Confronted with such a barren landscape – as we at least would see it – the Greeks had no alternative but to entertain themselves.  This they did foremost through the symposium, a word which means literally “drinking together.” (p. 146) 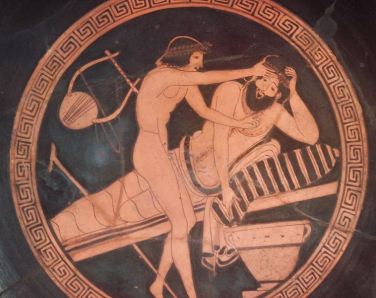 Garland is quick clarify that the symposium was not the ancient equivalent of the boys getting together for a few beers.

Rather, it was a highly ritualized and religiously-influenced institution with hallowed rules on everything from the manner in which guest were invited to participate, the room where the symposium took place, the sacred observances that occurred before any drinking commenced, the dishes used during the symposium, and even how much water would be mixed with the wine on a given evening.

As in any era, whenever a group of men gather together to drink, drinking games are a likely result.

However the most popular game of the symposium, called the “capping game”, came as a surprise to me for its seeming sedateness (especially after the caveat that some symposia descended into drunken debauchery).

So too did the game whose object was to flick wine into nutshells in order to sink them where they floated in a bowl full of water strike me as incongruously unexciting.

(On the other hand, the additional practice of hiring live entertainers such as flute-playing girls, dancing girls, jugglers, tumblers, and buffoons, as well as the custom of roaming the streets in drunken, often violent, gangs at the end of the symposium or when moving from one to another did not surprise me in the least.)

The Ancient Greek permissiveness toward same-sex relations (among men) seems to be a fact well-known in mainstream society.  It is something for which we often deem the ancients as more progressive than our modern intolerance era (for all that sexual orientation as we conceive of it is a modern notion that did not at all exist in Ancient Greece).

Garland, however, reveals that ancient views on homosexuality were more subtle than people being either wholly for or against it – more complicated even, than mere tolerance or even simple indifference:

[T]hey regarded homosexuality predominantly as an episodic phenomenon, a pattern of behavior that belonged to a particular period of one’s life rather than a permanent condition….

A homosexual union between males was acceptable only when asymmetrical to use the modern jargon; that is to say, when it involved a younger and an older man and when it had a pedagogical as well as sexual dimension….

[H]omosexual relations were not expected to replace heterosexual relations.  Rather, they were intended to supplement them.  In fact, those who committed themselves exclusively to homosexual acts were mocked and vilified, as we see from the abuse that was heaped upon such effeminates (as they were regarded) in the plays of Aristophanes. (pp. 171-2).

4) The lot of Sparta’s helots

While I knew that slavery was an integral part of the ancient world, I knew next to nothing about the unique case of the slaves of Sparta. 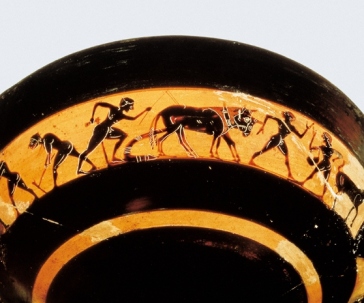 Unlike in other city-states, all of Sparta’s slaves were fellow Greeks, their very name – helots, coming from the verb meaning “to capture” – tells something about both their origin and their ongoing treatment as an underclass of people.

(The situation – indeed even the existence – of the helots was certainly not reflected in 300, the popular mainstream movie about the Spartans and the 5th century battle at Thermopylae.)

Helots, who were state owned, were required to till the land and pay half their produce to their masters.  It was this arrangement that left Spartan citizens free to discharge their military duties, and it is no exaggeration to state that the Spartan way of life was more dependent on its slave force than any other Greek community of which we have knowledge. (p. 123)

He goes on to state that,

[S]ome scholars estimate that there were seven time as many helots as citizens. (p. 123)

As well as that,

[T]he Spartans were reluctant to engage in lengthy campaigns for fear of a rebellion during their absence.  Indeed, the Spartans may well have lived in greater fear of their slaves than did most other Greek communities. (pp. 123-4)

[The helots’] condition was so wretched that the poet Tyrtaios describes them as “asses worn down with great burdens”. (p. 124)

The fact that the ephors [elected senior magistrates in Sparta] declared war on the helots at the beginning of each campaigning season meant that killing them was not deemed impious. (p. 121). 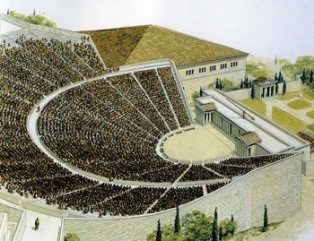 Likely everyone knows that drama – most notably tragedies and comedies performed on stage – originated in Ancient Greece, specifically in Athens.

I didn’t know, however, that the Greeks invented theatre festivals – the ancient equivalent to modern fringe festivals – as well.

The City of Dionysia was a four-day festival held in March….  Because the City Dionysia coincided with the beginning of the sailing season, many foreigners and tourists would have been able to attend, including Athens’s allies. (p. 271)

The festival took place at the Theatre of Dionysos in Athens, which could accommodate some 20,000 spectators.

Garland is quick to warn, however, that,

Going to the theatre was hardly a relaxing experience in the modern sense of the word, because the audience was expected to sit through four plays a day at least, or five if the tragic plays performed in the morning were followed by a comedy in the afternoon.  That amounts to about ten hours of uninterrupted performance a day.  There were no intervals, except between plays.  Not surprisingly, audiences became extremely restless if they were bored or displeased. (p. 274)

Such boredom, Garland adds, at times led the crowd to bombard the performers with stones and fruit.

Now a modern-day comedic media trope for expressing derision toward a public performance, the throwing of fruit in particular is in reality both an artefact of history and as old as the act of public performance itself.

Do you know any surprising or little-known facts about the ancient world, from either Ancient Greece or elsewhere?  Let me know in the comments.