So many creative initiatives begin life as an offhand comment, initially dismissed.

So it was with #HFChitChat—the idea of a recurring Twitter chat and online community for writers of historical fiction.

I’ve previously written about my time in Washington DC back in June at my first ever Historical Novel Society writers’ conference.

Specifically, about the three key goals I arrived with: learning about the current state of the historical fiction genre, documenting the conference for those not in attendance, and getting to know my histfic writing peers.

Well, one of the peers I met was a Texas-based writer of American history—Sydney Young.

I’d previously “met” Syd via Twitter in 2018 while we were both preparing to enter PitchWars, an online writing contest that matches writers with writing mentors who help them revise their completed manuscripts.

Syd and I connected by virtue of being among the few historical fiction writers entering the contest (PitchWars leans heavily toward fantasy, romance, and young adult). 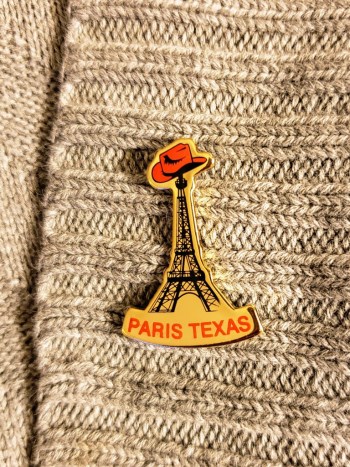 It was Syd who ultimately convinced me to attend this year’s HNS conference.  It was our first time meeting in person.  I’d never met a Texan in real life before, and she sounded exactly the way they do in the movies.

She later gave me a present—a pin from Paris, Texas, where she lives, which comprised of the Eiffel Tower with a bright red cowboy hat on top.

She also told me what it is one says when they’re in Paris, Texas.

During the final day of the conference, while me, Syd, Carrie (pictured above), and a couple of other writers connected to PitchWars sat at a round table in the grand ballroom eating lunch and talking shop, Syd mentioned how great it would be to have a forum on Twitter for histfic writers to connect and discuss these things all the time, not just at conferences.

I only caught the remark in passing; I had my head turned at the time, in conversation with the person on my opposite side.  I silently agreed and left it at that.

The next time Syd mentioned the need for such a forum was on Twitter itself.  She’d already started posting various topics and brainstorming possible hashtags.  I suggested using #HFChitChat—historical fiction chitchat— which she liked.  But still, I didn’t get involved.

I admit, I’m kind of a sluggard like that.  It takes me forever to commit to pretty much anything.

The third time Syd mentioned the forum was in a blog post she wrote about the importance of historical fiction writers being on Twitter, which included some tips to help newbies get started.

At the conference, we both found that a lot of older writers weren’t using Twitter, and saw this as symptomatic of a deeper problem in the histfic community as a whole.

Namely that the readership of historical fiction tends to skew older than with other genres—likely due to a shortage of voices, themes, styles, and stories that are relevant to younger readers amongst what’s commonly being (traditionally) published at the moment.

This poses a serious threat to the longevity of historical fiction, for any genre that’s not actively adding new readers is destined to vanish once all the existing readers are gone.

In her post, Syd included #HFChitChat as a possible hashtag newbie histfic Twitter writers could use.  She even credited me with creating it!

Finally, she had lured me in with flattery (I’m a sluggard, but a vain one, apparently).  It was enough to get a soft commitment out of me: #HFChitChat was now officially part of my long-term to-do list.  I agreed to help brainstorm possible chat topics, albeit with no sort of timeline attached to it.

A goal without a plan is just a wish, according to French writer, aristocrat, and aviation pioneer Antoine de Saint-Exupéry.  #HFChitChat could have easily failed before it even got started.

Except by now, others had observed Syd and I discussing it on Twitter, and expressed interest in taking part.  All at once it was like a light had been switched on in my mind.  Suddenly I was the one publicly committing Syd and me to this project.

Knowing that it was something others besides just the two of us wanted—and that a Twitter chat could be a great way to find those histfic writers who are also interested in engaging younger audiences—was the final kick in the pants I needed.

Thankfully Syd was ready to get started (Syd had been ready, patiently waiting for my plodding ass to get on board) and several emails, DMs, and shared documents later, #HFChitChat—and our corresponding Twitter presence, @hfchitchat—is now officially live.

I’m super-excited to have partnered with Syd to help bring her great idea to fruition.  I’d like to think that what I lacked in initial vigour, I’ve since made up for with organization, operational insight, and strong attention to detail.

At my day job, I’m constantly being referred to as task- and/or results-focused.  I’m utterly convinced this is a euphemism, at least in part, for something else entirely.  Still, there’s no denying my love for seeing a job done properly and efficiently.

The goals of #HFChitChat are as follows:

Follow @hfchitchat on Twitter to be part of the community, and join us for the inaugural #HFChitChat live Twitter chat on Tuesday, August 27 at 9:00pm EDT (UTC-04:00).