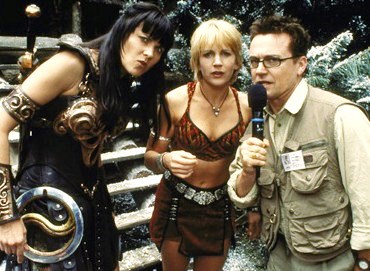 A reporter determined to get the scoop on Xena

In time, all good things come to an end.

In a way, I could have said this at the end of the season 5 of Xena Warrior Princess, which itself wasn’t as strong as seasons past, in my opinion.

By season 6, much of what previously made the show great – Xena and Gabrielle wandering Greece and interacting with various gods and mythological figures – fell by the wayside.

The prophesied Twilight of the Gods has now occurred, leaving only a pair of Olympians still alive and with dramatically reduced powers as the theology of the One God gains prominence.

The Roman Empire has greatly expanded its might, influence, and general visibility in the world.

Beloved comic relief character Joxer is long dead.  Even the Amazons have been all but decimated.

In short, we’re not in the Classical era and Ancient Greece anymore.  This fact is further emphasized by the insertion of Xena into the mythology of other cultures, including the Norse Valkyries and a soul-eating demon of Japan during the series finale.

Back on the beaten path

This season felt the least cohesive of all the seasons, with no sweeping character arc for either Xena or Gabrielle.  In a way, this was to be expected, for by this point there really aren’t any further ways for Xena and Gabrielle’s characters to develop and grow.

Every emotional bump in the road they experience during this season feels like a re-tread of previous ground (e.g. Gabrielle’s struggle to reconcile her peace-loving idealism with her chosen path and undeniable skill as a warrior).

Neither does season 6 contain much of an overall plot arc, despite featuring more than one multi-part story spanning two or three episodes.

This season contained the requisite “present-day” episodes – comedic offerings found in every season in which the lore of Xena, presented as historical fact, is placed in a present-day investigative or archeological context.

However the four such episodes in season 6 was a higher number than in any other season, as if the writers couldn’t come up with enough for Xena and Gabrielle to do during their own time period.

That being said, one present-day episode – “You Are Here” – remains one of my favourite episodes of the show of all time.

In this one – which has less a present-day setting than a present-day character insert – an investigative journalist, looking to expose Xena’s supposed efforts to set herself up as a god, hounds her every movement with a TV crew and conducts interviews with numerous people who know her – both friend and foe, mortal and immortal – to try to paint her in a negative light.

Varia is as brash as she is beautiful

Another high point of season 6 was the very late introduction of a new character to the Xenaverse – the brash, passionate, at times misguided Amazon queen Varia, whose fighting skill rivals that of Xena herself.

Varia, to this day, remains my favourite character from the show aside from Xena herself – a far more worthy opponent for Xena than the waify-looking Callisto of earlier seasons.  Watching Xena and Varia duke it out before Varia finally has a change of heart at the last possible moment is one of the best fight sequences the show ever produced.

The end of the line

The two-part series finale of Xena remains one of the most controversial episodes of the show.

Much of this has to do with the decision to set it in Japan. Prior to this, Xena was never said or shown to have any connection to Japan.  China, yes, through her old mentor Lao Ma, and even India, where she and Gabrielle travelled in season 3, but not Japan.

Xena and Gabrielle in Japan

What’s more, we’re introduced through flashbacks to a young girl from Xena’s past named Akemi, who in her time was supposed to have been Xena’s soulmate of the same magnitude as Gabrielle.  Akemi was even a writer (she wrote haiku) like Gabrielle is.

I’m sure these similarities were intentional, but I’m not sure why.  In my opinion, it seemed to diminish the strength of Xena’s relationship with Gabrielle.  To me, a person is only ever meant to have one soulmate (or if more than that, definitely not all of the same “type”).

While the story itself was fine, for a series finale, I felt it all came too much out of nowhere.  As an alternative, I’d have much preferred an episode that brought favourite long-time recurring characters (e.g. Autolycus, Salmoneus, Hercules, Minya) together for a final send-off.

I did, however, appreciate the sort of passing-of-the-torch element of the finale in which Xena recognizes that although Gabrielle’s fighting style and methods are completely different, she still knows how to get the job done.

As well, I liked the fact that Xena was finally able to achieve her long-sought redemption for her evil past.

My own series finale

When I initially decided to replay all six seasons of Xena Warrior Princess, my reasons for doing so were twofold:

I discovered pretty early in my replay that the show wouldn’t prove particularly useful as research.  Being a work of fantasy first and foremost, the show’s writers played pretty fast and loose with both the historical timeline and many of the known facts about the Classical Greece.

The very premise of the show – that of an all-powerful, sword-wielding warrior woman, let alone one who wanders the countryside with a female companion, unescorted by a husband or male relative – is so blatantly anachronistic, for that reason alone, almost nothing that occurs in the show can be considered even close to accurate.

However, historical inaccuracies aside, I find that the show holds up surprisingly well 15 years later.

In a lot of ways, it was even ahead of its time, just so for having an unattached, sexually-liberated woman as the lead character whose driving motivations are making the world a better place, her own personal redemption, and her devotion to her female best friend/soulmate/possibly lesbian lover.

The show is very much a celebration of female empowerment and contained very little romance, which is so often associated with “girl shows” to the exclusion of much else.  It also featured an astounding amount of ethnic diversity among its secondary characters that puts many modern shows to shame.

Upon re-watching, I experienced many of the same positive feelings I felt watching it the first time around.  I remain thus inspired to someday write something in homage to the many good years, the past one included, that I’ve spent with Xena of Amphipolis, the Warrior Princess.