That got your attention, didn’t it?

(A/N: For the purposes of this post, I am defining a sex scene as one in which sexual activity is explicitly described, rather than those of the fade-to-black, implied sex variety.) 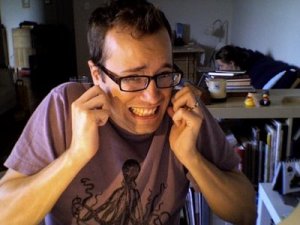 I was too scared to type the words “sex scene” into a Google Image search, afraid it’d result in a reaction similar to this.

Sex scenes are among the most difficult scenes to write.  Part of this is because doing so in one way or the other reveals to the world what you find sexually appealing, either through what happens in a sexy sex scene or what doesn’t happen in an intentionally unsexy one.

In North American culture, sharing your sexual turn-ons with people you haven’t even met (in this case, readers) isn’t something people tend to do, at least not using their real name or one by which they can otherwise be traced.

Furthermore, sex scenes have a far greater potential than other types of scenes to read as unintentionally humourous, repulsive, or cringe-worthy embarrassing.  Not to mention they require some pretty exact choreography.

The fact is, not every story requires a sex scene, even if the story is a one that centers upon a couple and the events of their romantic relationship.

A writer doesn’t have to follow the characters into the bedroom (or wherever the deed takes place).  Your characters might actually be too shy.  This may seem a bit facetious, but truly, it puts forth a question worth asking: Are your characters the type that would allow their lovemaking to be observed?  Do you really need to go there?

What I’m alluding to, of course, is the question of whether or not a sex scene furthers the plot.  Stories are about characters, and characters behaving in ways that are consistent with their character traits generates action, which is the driver of a story’s plot.

An affirmative answer to the second question posed above therefore equates to an affirmative to the first as well.  That is to say, if something plot-related results from the sex scene – if it’s purpose is to do more than just titillate; if it results in, for example…

– then your characters are, indeed literary exhibitionists.  But if they are not – if they’re not the type for whom the fallout of their sex lives rears its head in other keys aspects of their lives – then it’s probably best to keep their lovins’ behind closed doors.

Been there, done that

I have written only two sex scenes in all my time as a writer; this despite the fact that since 1996, I’ve written approximately 600,000 words – more than halfway to the mythical 1,000,000 words that will magically transform me into a writing master, overnight.

The first sex scene, written back in 2003 as part of my first (incomplete, shelved) fantasy novel, occurred following the joyful reunion of a couple who’d been unexpectedly separated for nearly a year.  This scene furthered the plot through the counterpoint it provided to the couple’s bitter breakup in the following chapter.

The second sex scene was written back in June as part of my novel-in-progress.  It involved the consummation of the protagonist’s arranged marriage, and unlike in my first novel, is an example of an intentionally unpleasantly unsexy sex scene.  Given that my novel is historical fiction and takes place in the Middle Ages, this scene is important in answering the question of how people did it medieval style, which isn’t at all as gratuitous a motivation as it might seem.

The ultimate goal of historical fiction is to contrast life that was with the way we live today.  Politically-arranged marriages were as hugely important in medieval society as this particular one is important to the plot of my story.

And consummation was an equally important step in the act of getting married, to the point that legitimacy of the marriage could be called into question if consummation did not take place within a reasonable amount of time (not as unlikely as one might believe when children as young as 12 were often wedded to secure titles and alliances).

Plus, you should see how much research is out there about medieval sexuality to take advantage of!

How to do it good

To help me in the writing of the two aforementioned scenes, as well as any others I may write in the future, I utilized the book The Joy of Writing Sex by Elizabeth Benedict.

In my fan fiction post, I previous quote three of Benedict’s ten general principles for writing a good sex scene (numbers 5, 9, and 10).  I now quote all ten of them (pp. 41-50) for anyone else who wants their characters to be, as it were, good in bed:

1. A sex scene is not a sex manual

2. A good sex scene does not have to be about good sex

4. Your fear is your best friend

5. Sex is nice, but character is destiny

6. Only your characters know for sure (what to call it)

7. Take your cues from your characters

8. Your characters must want and want intensely

9. A good sex scene is always about sex and something else

10. Who your characters are to each other is key

One final tip from Benedict quoted from page 115:

A sex scene can and should dramatize an essential truth about who the characters are.  Lovers who are awkward and uncommunicative in bed are probably the same way in the kitchen.

This is just a sample of the advice Benedict offers.  The entire book is highly recommended.

12 thoughts on “How to Write a Sex Scene”