I am a writer—a good one.  And once upon a time, I just assumed that applied to all types of writing.

I tend to assume a lot of things about my skills and abilities in general.  Like that time I took tennis lessons.

I’m a pretty fit and active person, so I just assumed I’d channel my inner Serena Williams and kick ass at it.

In reality, I couldn’t even get my serves over the net.  And the only part I was inherently good at was the laps the instructor had us run around the court in between skill-building drills.

Then there was the first time I drove an extended cab pickup truck, when I worked for the Canadian park service.

“I’m an excellent driver.  This will be no problem.”

Or so I thought.

In reality, for months after the fact, skid marks marred that section of park road where I took the curve way too fast for a vehicle that size.  I only just managed to not end up in the ditch, or worse.

I have, however, always considered myself something of a poet.  Even though I’ve received almost no formal training specifically in poetry.

I’ve always had a way with words; what writer can’t claim that.  And my enthusiasm for this form of writing has certainly led me to do a fair bit of learning by doing.

Between 2006 and 2008, I wrote several angsty poems about unrequited love and not fitting in.  Because art imitates life, as they say.

Meanwhile, in 2004, for my first (incomplete, shelved) fantasy novel, this time channeling my inner Tolkien, I composed 18 poems/songs of the world the story was set in.

Some of these were pretty darn good, if I say so myself.  And I suppose I’ll have to since the project is shelved.

(With luck, I’ll someday find a way to repurpose all that lost worldbuilding.)

Around the same time I was shelving this ill-fated fantasy novel, I became interested in music, took up the guitar, and enjoyed moderate success at it over the next couple of years compared to friends who’d been playing the same length of time.

I have huge, strong, man-hands

Because of this, I was able to master barre chords almost immediately.  And while I did initially struggle with singing and playing at the same time (because my hand kept wanting to strum what I was singing), through practice and persistence, I learned how to partition my brain appropriately for the task.

Throwback photo of me learning to play the guitar

How hard could it be? I thought.  Song lyrics were just poetry, and I’d written 18 poems for the novel I’d just shelved for the irredeemable mess that it was.

I’d taught myself how to sing and play at the same time.  I could squeeze the neck of my guitar in a barre chord like I was trying to strangle a man.

Still, I wasn’t completely full of arrogance (or that other thing that so often goes along with it).

I would take a songwriting course!

Which is exactly what I did.  In 2010, I signed up for Songwriting 101—an evening course offered by the Vancouver School Board’s continuing studies department.  I showed up at the first class ready to slay.

Only to discover that songwriting was WAY harder than I’d expected.  There was so much more to it than just writing a poem and setting it to music (which, incidentally, the instructor claimed was the more difficult way to go about writing a song).

Songwriting was especially difficult when, barre chords aside, I wasn’t really ~that~ good a guitarist, nor did I know ~that~ much about music theory.

Plus, what a time to experience writer’s block.  I was completely stumped as to what my song should be about.

I had nothing to work with, for all my existing poems—both the fantasy ones and the angsty ones—were too complex for me to build a melody around.  Already, the melody was proving the hardest part of the whole process.

Incidentally, the instructor also said the guitar was not the best instrument to use while melody-writing.

The final exam was in two weeks.  Not only did I have to write a song, I had to perform it solo in front of my entire class.

So many popular Christmas songs have super-simple melodies, designed to be easily sung and remembered by almost everyone, particularly children. 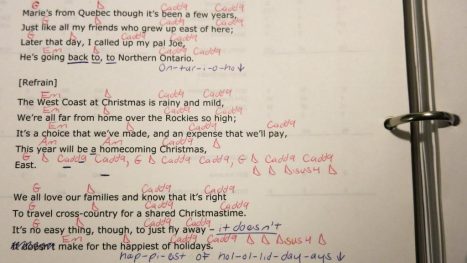 Lyrics, chords, and performance notes for my Christmas song

With the exam taking place in November, I could pass a Christmas song off as seasonally-influenced inspiration, rather than the act of utter desperation that it was.

I would make it a comedic Christmas song.  A person can conceal all sorts of incompetence with humour.

So my Christmas song was born, on the subject of the unique challenges one such as I—an east coast transplant to the west coast—faces during the holiday travel season.  All of which are rather amusing, in a laugh-to-keep-from-crying sort of way.

I performed the song, had everyone in stitches, passed the course, and haven’t written a single note of a single other song since.

Talk about a one-hit wonder.

These days, I don’t even play my guitar anymore

I haven’t done so for years, for I’ve come to realize I can only truly master one extracurricular at a time.

And I’ve thrown myself chest-deep into my writing.

I can barely remember how my Christmas song goes.  I didn’t score it out, nor was the final presentation recorded.

I can sort of remember the melody.  The bridge, not so much.  For the baseline, I’ve got the chords written down, but apparently there was also a guitar solo midway through.  Who the hell knows what I cobbled together for that.

I do, however, have all the lyrics because that is writing, and I keep all my writing.  I am a writer.  A good one.  And once upon a time, I just assumed that applied to all types of writing.

I wish all my blog readers a very Merry Christmas, Happy Holidays, and Happy New Year.  And for any among you who are travelling from west to east for the holidays, a very Happy Homecoming Christmas as well.

This song is for you.

I have a good friend, her name is Marie,
At the winter market saw her waving at me;
“I’m going for Christmas,” she said with a smile,
“To visit my folks I haven’t seen in awhile.”

Marie’s from Quebec though it’s been a few years,
Just like all my friends who grew up east of here;
Later that day, I called up my pal Joe,
He’s going back to, to Northern Ontario.

The West Coast at Christmas is rainy and mild,
We’re all far from home over the Rockies so high;
It’s a choice that we’ve made, and an expense that we’ll pay,
This year will be a homecoming Christmas,
East.

We all love our families and know that it’s right
To travel cross-country for a shared Christmastime.
It’s no easy thing, though, to just fly away –
It doesn’t make for the happiest of holidays.

I’ve further to travel, for when I left home,
I packed up my bags and I said farewell to Nova Scotia;
Ticket in hand now, approaching my seat,
I’m set to take off to journey sea unto sea.

We’ve all lived so long now on the temperate West Coast,
We’ve given away our eastern cold weather clothes,
And it’s too hard to pack that brand new sweater for the plane ride back,
That’s a homecoming Christmas,
East.

The fares are too high to every year make us fly so far,
For a homecoming Christmas,
East.

The next cheapest way is three full days on a bus one-way,
We can’t go home every Christmas,
East.

We all love our families and know that it’s right this year,
For a homecoming Christmas,
East.

Have you ever overestimated your abilities to your detriment?  Have you ever written a Christmas song (or any song)?  Let me know in the comments.

(A/N: There will be no new posts until after New Year’s.)

10 thoughts on “That Time I Wrote a Christmas Song”