With the exception of a brief fondness for Superman in my childhood – and this more on account of his being Christopher Reeve rather than “super” – I’ve cared little for any superhero’s exploits.

This is not say I don’t enjoy larger-than-life, heroic characters.  My favourite fictional character, the mighty Xena of Amphipolis, aka the Warrior Princess, is no less of a prodigious do-gooder than the average caped crusader.

I’ve just never resonated with the whole meta-story that accompanies so many of the major superhero and their franchises: the secret identities; the dorky costumes; the thinly-veiled male power fantasy of a supreme being singlehandedly (or near enough to it) defeating an equally singular force of great evil; the trashy summer blockbusters that show them doing just that.

And doing it complete with death-defying (and the laws of physic defying) stunts, motivations of overwrought idealism, and apocalyptic battles that level entire cities with little thought of collateral damage so long as the hero “wins” and gets the girl in the end.

Given this, I wasn’t particularly stoked when a friend insisted group of us go see Wonder Woman.  All of the above is bad enough when the hero in question is male.  I could only imagine the monstrosity that would result from casting a woman in the lead instead.

Still, I went along for the ride.  And was pleasantly surprised.

In being only one of a handful of female superhero movies ever made in North America, and the only one ever directed by a woman, Wonder Woman contained far less macho bravado and sexist nonsense than is common in the genre.  In particular, there were three aspects of the movie I really appreciated:

1) Themyscira and the Amazons

Anyone who knows me and my fondness for sword-wielding warrior women would have seen my love for the women of Themyscira coming a mile away.

In all honestly, this part alone was worth my $18 ticket.  I was beside myself with joy watching these women fighting and training with their swords and other melee weapons, their bows and arrows, and their gravity-defying attacks and evasions.

In particular, I appreciated how many of the women cast to play the Amazons were athletes.  Because of this, they looked the way an Amazon should – physically imposing; like she could truly kick your ass – instead of like some waify supermodel or actress who lives on lettuce.

At the same time, although all the Amazons were fit, a number of different body types were represented.  The Amazons also had racial diversity among them, which was the greatest surprise of all.

I’ve written before about the importance of representation of diverse people in media, especially fantastical media (however tangentially it might be based on history).  In this regard, in this relatively short part of the movie, Wonder Woman did an impressive job.

Wonder Woman showcased an impossibly invulnerable heroine descended from a society of similarly near-invincible women.  The average woman can never hope to match any of their feats.

Because of this fact, I loved the character Etta Candy who, while lacking that Themysciran swagger and physically badassery, was nonetheless a strong female character.

As Steve Trevor’s highly enthusiastic and intelligent secretary, Etta is just as comfortable helping Wonder Woman pick out suitable fashions as she is helping coordinate a war mission through the management of travel arrangements and military intel and by liaising with government officials.

In her own words, she’s a woman who fights with her principles (and only a little fisticuffs now and then, should the need arise).

Etta is an important character because she demonstrates a much more conventional, yet much less celebrated, form of feminine strength, the dearth of which in mainstream entertainment I’ve written about before.

More importantly, in this movie, both Etta’s and Diana’s (i.e. Wonder Woman’s) strength appear side by side with neither shown as inherently better than the other.

3) Diana doing whatever the hell she wanted

In a way, the entire movie was one big display of Steve Trevor trying to stop Diana from doing certain things, and Diana going ahead and doing them anyway.

In other words, Diana exercised her personal agency as both a woman and as someone whose goals, beliefs, and desires were different from Steve’s.

At one point, Steve says to Diana, “I can’t let you do that”, to which Diana promptly replies, “What I do isn’t up to you.”

This was such a great line, not only because it blatantly states the obvious, but also because, at that moment, what Diana wanted to do actually wasn’t a well-advised course of action.

But this right there is the gist of recognizing a woman’s personal agency.  It means a woman isn’t prevented from making her own choices, whether it happens to be a good choice or not.  If it is, great.  But if it’s not, than she can deal with the consequences and grow stronger in character as a result.

Acknowledging women’s personal agency means abandoning the paternalistic notion that women need to be controlled and cared for by men, who supposedly know what’s best for women better than women know for themselves.

Men and women can absolutely be partners in an endeavour, each contributing their unique skills and strengths that they might possess in excess of the other person.  But such a partnership must always be one of equality and mutual respect, regardless of how different the two people might be. 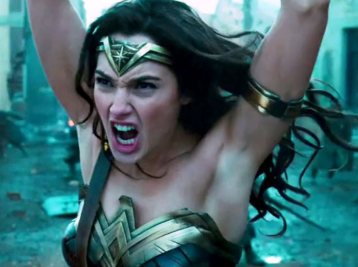 There is no denying that the character Diana is physically attractive.  She’s conventionally beautiful, fit, and spends most of the movie clothed in woefully revealing (however iconic and canonical) set of body armour.

Yet none of the shots of her in the movie emphasize these facts.

In so many movies, both superhero movies and others, female characters bodies are ogled by the camera, with close-ups on their breasts, their bottoms, their legs, and their lips.

Basically, the camera takes on the gaze of a heterosexual male and imposes a sexual overtone to everything a female character does.  It reduces her importance in the movie and her value as the depiction of a person in general to the appeal her sexual body parts.

Thankfully, in Wonder Woman, such an objectifying gaze on women is more or less absent.  It is here that the influence of director Patty Jenkins is most obvious.  Particularly during the action sequences shot in Themyscira, the Amazons perform feats of peak athleticism without a whiff of sexualization during any of it.  This goes for most of Diana’s fight scenes as well. 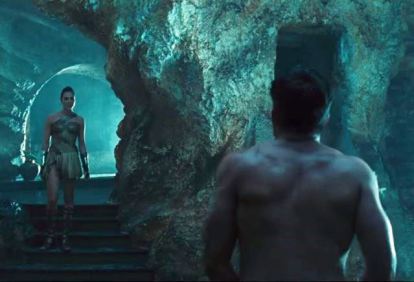 Ironically, there’s a scene where Steve is all but shown naked after a bath that could be considered objectifying (for all that the shot was blink-and-you’d-miss-it quick and neither focused nor lingered on him as would have happened with a near-naked woman).

However this one scene does nothing to rebalance the sheer volume of past instances women have been objectified in film.  Neither does objectification hurt men the same way hurts women given men’s dominant position in both mainstream media and the society that produces it.

Furthermore, rather than being solely for kicks, this scene managed to contribute to theme of the movie regarding Diana’s unfamiliarity with men and her knowing nothing of life in the outside world.

Did you see Wonder Woman?  What did you think of it?  Let me know in the comments.

9 thoughts on “3 Reasons Wonder Woman was a Wonderful Movie”