The year 2016 knocked the wind out of a lot of people’s sails.

Politically, it showed considerable regression in the progress of equality and human rights.

A seemingly inordinate number of notable figures and celebrities passed away, many surprisingly young, which suggests we haven’t come as far in disease prevention, mental health treatment, and drug harm reduction as we may have thought.

Many people I know – and myself as well – endured any number of personal hardships, including the death of loved ones, chronic illness, financial difficulties, work stress, family strife, and household drama.

Even the weather was less than what people expected, at least in Vancouver, where I live: cooler than usual during spring and summer; snow – snow! – and icy temperatures throughout December.

With challenges like that, there’s no faulting anyone who might have fallen short on any goals or resolutions they had for 2016.

Nor is it any excuse to leave those goals floundering in limbo.

In 2016, I came incredibly close to completing my primary New Year’s resolution as commenced on January 3 of that year, namely, a complete rewrite of my historical fiction novel-in-progress.

With 31 (then 30, now 31 again) chapters to work through and a plan to complete a chapter a week, I was already behind schedule but still within reach of completion before I devoted first four and then another four weeks to first the care and then the passing of my father.

I made only minor progress on my goal to look into formal programs of study for my professional development and future career advancement.

This one is pretty much owing solely to procrastination.

I did join a networking group for emerging practitioners of the field I’m considering pursuing (program evaluation) and attend most of its meetups.

However, I was so wrapped up in my novel, I left the examination of actual schools and degrees until very late in the year, only just starting a conversation in December with a program department head – a conversation that was promptly interrupted by both the holiday season and my abrupt journey home.

This wasn’t actually a New Year’s resolution (this time), but it’s still an ongoing goal that’s been going on far too long.

Finally, there is my other actual resolution: to determine the plot of my next historical fiction novel by continuing my research into Ancient Greece, where the novel will be set.

This one, pleasantly, saw moderate success.

After two false starts, I finally finished reading the most interminable reference book ever.

This is in no way a criticism of the book.  Rather, it was just so incredibly informative, with every single sentence dense with useful facts, it took forever to go through it all since I was highlighting and making marginal notes as I went.

I still don’t have the story’s plot, but my latest reference book has helped me figured out the backstories of three major characters.  This, combined with the story premise I’d had in mind all along, feels like a huge step in the right direction.

We’ve all heard the famous adage: If at first, you don’t succeed…. 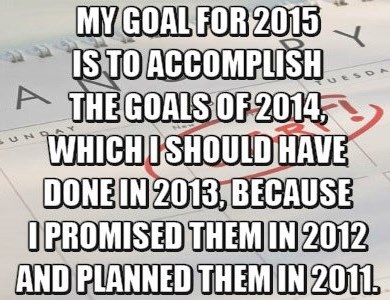 Even if you find yourself not succeeding for years.

I used to have an impressive streak of successful New Year’s resolutions.  Completed in the year they were resolved, even.

I’m not sure if it’s that the size of my goals that’s changed, my ability to prioritize them amongst the additional obligations in my life, or something else entirely.

One thing that hasn’t changed, though, is my ability to dream of the outcome of my goals’ completion.

So do it already, self.  Make a plan and make it happen.

As such, my #2017goals, once again, and this time with feeling, are as follows:

1) Finish my second draft of my WIP.

With only four chapters left to rewrite, this goal won’t take the entire year.  It shouldn’t even take half the year.

This is why, continuing with my chapter-a-week timeline, with a buffer built in for the unforeseen, I’m only giving myself until the end of February to get it done.

2) Devise the plot for my next novel, as informed through continued research into Ancient Greece

I just ordered two more reference books to supplement the two other I already have.  In addition, I’ll a list for further reading now that I better understand the direction my research needs to take.

I’ve also set aside 30-60 minutes before bed every night as my research time, so this goal, I believe, is well in hand.

3) Make a decision on going back to school

This includes both a specific program of study and a timeline of when I plan to pursue it.

For this goal, I already have so many resources in place:

This goal can practically complete itself if I just get up off my a** and just do something with it.

4) BONUS: Form a critique group to help me make further revisions to my WIP

A new addition to the list, both to follow up upon resolution #1 and to compensate for that one will only take two months.

I’ve looked forward to doing this since before I had a completed manuscript to revise, and now the time is just about right.

(I will write about the process of assembling this group in future posts.)

What are your goals and resolutions for 2017?  Are they new goals or repeats from past years?  If the latter, what will it take to make this year the year of success?  Tell me about it in the comments.

8 thoughts on “If You Can Dream It, You Still Have to Do It”