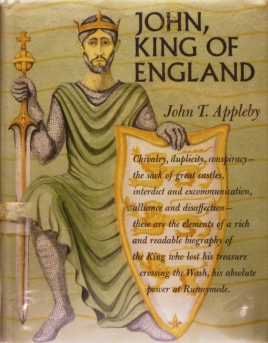 More people are familiar with King John of England than probably realize.

This is not so much due to his own merits, but rather his frequent association with another, better-known individual from history:

(King John, just so you know, was a real historical personage.  Robin Hood, meanwhile – not so much.)

My second half-book for 2013 – John, King of England by John T. Appleby – was an adventure to read because it was a reference book for my novel-in-progress that I had to continue if I wanted the “in progress” bit to remain true.

Yet is was also so dense with historical information, it took forever for me to get through it.  No word of lie, I renewed this book from the library four times for three weeks at a time.

It was also the book that quite decisively taught me how not to go about writing a work of historical fiction, such as I currently am.  But that’s the topic of a whoooole other blog post.

Despite how long it took to read John, King of England, it was very enjoyable.  It was written in a dry, witty style typically attributed to British humour.  For a long time, I assumed the author, John T. Appleby (who died in 1974), was British, only to discover that he was born in Fayetteville, Arkansas, was a Harvard graduate, and at the time of the book’s publication (1959) lived in Washington, D.C.

In the book, I learned about King John’s many failings that made him such a suitable distant villain in the Robin Hood lore.  A small selection:

One of the most interesting parts of the book came on the last page of the main text – and not just because is signified I’d finally reached the last page.  Appleby writes the following:

[W]e in these present days have seen such depths of human depravity that we cannot consider [John] as the unrelieved villain that he once appeared to be….  [W] hen we consider what men with absolute power have done in later days we are forced to almost admire John’s restraint. (p. 275).

Recall that this book was published in 1959.

The people of 13th-century England believed they were witnessing in John a new limit to the evil of mankind.  Appleby, in 1959, seemed to , believe the exact same thing of the despots of his day.

It is now 2013.  The world has seen plenty new heights of evil in the intervening 54 years.

Does a limit to such even exist?

6 thoughts on “Adventures in Reading: A tale of two tyrants – part 2”