A/N: Check out my Distractions & Subtractions page to read related posts or to submit your own writing subtractions.  I’m writing a blog post for everyone who makes a submission.

Today’s post is one of my own subtractions.  Coming up next week: a post for horror/dark sci-fi/supernatural writer and satirical essayist Eric J. Baker. 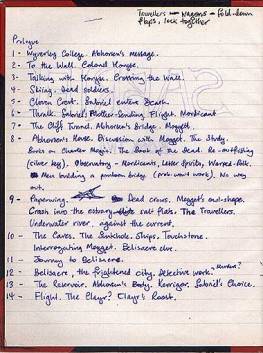 Yet, if you examine this creature known as “the writer” at its broadest taxonomical subdivision, you’ll find that most of them can be categorized into one of two main groups:

Pantsers write by the “seat of their pants”.  I’ve also heard pantsers referred to as “discovery writers” – seemingly a euphemism to make what can nonetheless be a perfectly orderly process sound less disorganized.

Plotters make outlines and do pre-writing, sometimes in massive quantities.  I’ve never heard of any other name for plotters, although that two can be interpreted as one of two extremes: Plot, as in a cunning, sexy, leather-clad precision.  Or plot, as in a burial plot.

For those who are regular readers of my blog, you probably know the following facts about me by now:

Which category do you think I fall under?

It may well be that some plotters are born and not made, at least in the case of me.  If so, that would mean while not thinking ahead of time about what I plan to write is my most fatal subtraction, not having an outline to work from (or having an outline that’s full or holes in the plot) is my oldest one.

I have a very clear memory of junior high school English class and being assigned to write short story.  That anxiety at facing a blank page is something else that’s been with me a long time.

Quite frankly, it was a horrible and horrifying experience.

Funnily enough, though, for someone who is a born plotter, and who experienced such stress at the prospect of writing a story, I didn’t come to start outlining until very late in my writing career – probably about 1998, after I entered university, and even then, only the barest, half-page, bullet-point skeleton of a plot.

For, I’d learned the science of stories in the interim (yes, I just used the word “science” to describe stories; this is me, remember) and how to work through plots in my head.  I wasn’t writing anything particularly long (yet), so these two techniques were enough to get me by.

Plus, I’d somehow picked up a strong bias against outlining, or, as I perceived it in those days, “writing ahead”.

I used to not want to write ahead because I felt to do so was to cheapen the story – that focusing on where in the plot I was here and now and allowing it to emerge organically in the moment was what it meant to be creative.

I have no idea where I got such a precious idea from.  I presently consider myself and artist, but I’m not that artistic.

And yet, I clung fast to this notion, even with nonfiction writing.  I would put up a stink when required to submit outlines for high school essays, and would even purposely hold back some of my best ideas from the outline to prevent their being tarnished by premature exposure to written words.

But then, four years later, I started writing a novel.

Everything changed.  I could not hold an entire novel in my head.  The basic twists and turns of the plot, yes, but specific lines of dialogue and expositional turns of phrase?  No way.  Not long enough to wait until I arrived at that point in the plot to organically, creatively bring them forth in the moment, like Athena issuing from Zeus’s head.

Have I mentioned what a slow writer I am?  And I was coming up with ideas all the time because by now, much like today, I was thinking about writing all the time.

My choice was thus clear: outline, or condemn everything I’d come up with to eventually being forgotten.

I began to outline in earnest.

I’ve never not done so since.

My outlines are not pretty.

Some plotters have outlines with chapter headings and beautifully nested bullet points broken down into scenes of a set number of words and set number of pages per chapter.

I am not that kind of plotter.

The outline for my novel-in-progress, which I created seven years ago, is an 82,000-word mess of half-page length bullets, semicolons, and dashes.  That’s the length of a novel itself.  My novel-in-progress is a novel in two volumes, but still.

My outline is no novel; you can be sure of that.

I’m still adding to my novel-in-progress’s outline.  These days, though, it’s serving a higher purpose than merely being my brain drain.

Dr. Phil, the (in)famous TV psychologist from Texas has said that, “Behaviours often begin for one reason and continue to another.”  I now use my outline to help me structure my novel as I write it.

Rereading the outline helps me determine where the novel’s chapter breaks should go; where to add in foreshadowing; where to slow down and give characters their voice, or otherwise flesh out an idea more; where to just make my point with a shot of exposition.

Where once outlines served a single function for me, they now fill two more very important roles: they help me find the end of stories so I can get started, and help me track various points throughout the middle so I can keep going.

7 thoughts on “Writing Inside the (Out)Lines”