Being in lockdown made my lose my ability to count.

In a previous post, I wrote about taking part in the “life in lockdown” photo challenge on Twitter.

The rules of the challenge were as follows: one photo a day of some aspect of your life during the COVID-19 pandemic for seven days, with no explanation of the bigger story behind each image.

In this past post, it being on my blog and not Twitter, I started to give the explanations I’d previously been denied.  I did this to record my experience of being in lockdown, which I’d largely otherwise neglected.

Roll20 is an online platform for participating in virtual tabletop roleplaying games.

RPGs are something that I do on occasion with a particular group of friends—previously in person and now, due to the lockdown and ongoing social distancing rules, over the computer.

For me, it’s purely a social pursuit.  I’m not a hardcore adherent of roleplaying, nor am I particularly good at it.  Roleplaying involves actively embodying the personality of your character and behaving as they would in real time.  It’s basically like acting, but without a script.

It’s difficult, at least for me.

This photo depicts a game my friends and I played using the Dungeons and Dragons system.  There are many different RPG systems; D&D is probably the most well-known one, but it’s not the one we typically use.

At this particular moment, the party of characters was attacked by a couple of dire rats, one of which took two filthy bites out of my character Joselyn’s leg and almost killed her.

More broadly, the picture represents how the whole of my social live under lockdown was (and largely still is) mediated via technology, largely video-chatting on Zoom and Skype, but also more phone calls and text messages than previous.

An unexpected positive consequence of this—one that many people have reported over the course of the pandemic—is that I’ve been communicating with family and friends (even friends I haven’t spoken to for years) much more often.

This is a consequence of people being home and available more often, but also, I suspect, a deep human need to stay close to people we care about during challenging and uncertain times.

I’ve always enjoyed and been fairly good at vegetable gardening, even though, living alone in an apartment, it’s been years since I’ve kept more than a few herbs in pots (because I usually travel in the summer, thus leaving a garden unattended).

This year I didn’t even get around to planting any herbs, but mint, being perennial, reappeared on it’s own.  It’s more or less my favourite herb anyway, which I use exclusively for making pots of herbal ice tea (technically tisane since it’s herbal).

This is something that I drink daily as a substitute for juice or pop, which are basically just liquid sugar.  I use three bags of fruit-flavoured tisane, like cherry, peach, and blueberry, a lemon, and 3-4 stems of mint, all of which I let steep in boiling water for an hour before adding cold water and then storing the whole teapot in the fridge.

Pre-lockdown, I used to only drink it with supper, but now that I’m home all the time I’ve started drinking it with lunch as well.

During winter when my mint plants are dormant, I include one bag of mint tea instead.  But fresh mint always tastes so much better, like summer. 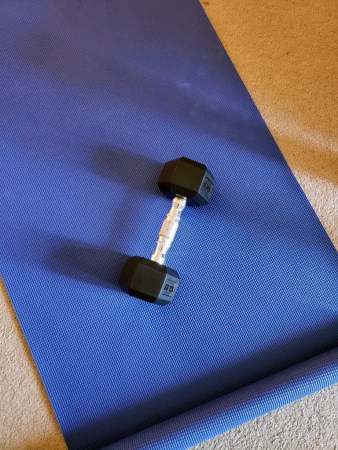 With my gym closed, I’m not working out nearly as much as I used to.

I’m still running twice a week, now outside instead of on the treadmill, but I used to go to group fitness classes two other days a week, plus cycle commute 8km round trip to work five days a week.

Lots of fitness routines are available online, but living on the top floor of a rickety old apartment, I’m limited in what I can do that wouldn’t sound like a stampeding elephant to my neighbours below me, who, this being a lockdown, are now almost always at home.

I’ve thus been taking especial care to keep my core strong.  Strong abdominal muscles are the key to success in so many other forms of exercise anyway.  Every day I’ve been doing 8-10 minutes of floor work on the mat, guided by one of several routines on an exercise DVD called Perfect Abs.

The weight, a 10-pounder, is from a set I was able to borrow from my gym, and is used in one of the routines.

Although my body continues to feel noticeably weaker and achy to this day (God knows that running on hard pavement takes as much as it gives back in health benefits), my core feels stronger than ever based on my ease in doing the floor routines, which I did less frequently and less easily pre-COVID.

(Because being in lockdown made me lose my ability to count, and I actually took eight photos instead of seven.)

One thing I’ve definitely been doing during the pandemic, as always, is writing.

More than ever I’ve leaned on my writing routine to both maintain a sense of normalcy and also to help give my day a consistent structure where my workday from home might start plus or minus an hour earlier or later than the day before.

I’ve also continued writing because back in May I was so very close to the end of my previous draft, its third act having plagued me for months.

This picture is a note I made on the printed pages of the final chapter, part of the setup for its climatic scene.

The climax contains many characters and a lot of movement, and I was struggling to imagine where everyone was standing in relation to everyone else just prior to that action.  In particular, I struggled with the character “E”, who I must have moved at least three times in the text with ineffective results every time.

This quick diagram, when it eventually occurred to me to make it, helped.  I did still move E two more times, but finally settled on the right blocking and finished the scene.

Four more writing days later, I finished the rest of the chapter, thus finally giving me, after over a year spend doing circular revisions of acts one and two, a complete and functional draft of my WIP.

A/N: I’m taking a break from blogging for the summer.  There will be no new posts until the fall.

One thought on “The Life in Lockdown Photo Challenge (pt. 2)”