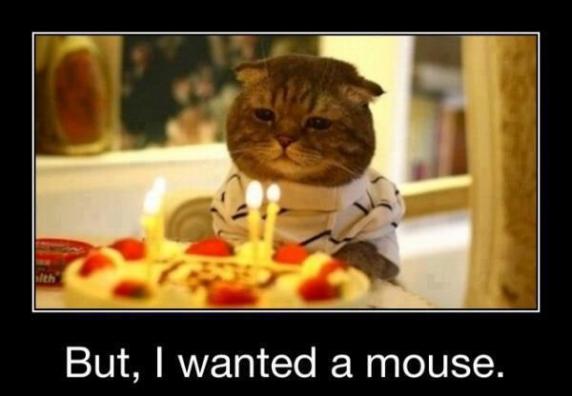 We are, so the song goes, living in a material world.

And I am most definitely not a material girl.

Or a writer, for that matter, since this means I have a never-ending stream of personally curated entertainment at the ready inside my head at all times.

Indeed, many of the material goods I desire tend to be in support of making the writing process easier.  Otherwise, they are things that help me get through my workday faster or more efficiently, which in turn helps make my writing process less difficult.

It really doesn’t take much to make me happy, gift-wise.  As proof of this, my birthday is this coming Saturday.  I’m turning, as I’ve taken to calling it, forty-minus-one.

Because I’m a loooong way from childhood, no one really buys me birthday presents anymore.  People do, however, often give me money so I can buy myself whatever I want.

Here’s the list of all the practical, non-extravagant, boring-as-I-am items that are on my birthday list for this year.

A body pillow, for those unfamiliar, is a pillow that, while the same width as a normal pillow, is 48-54 inches long.  It’s basically two pillows that are sewn together that fits perfectly across either the top or bottom of your bed, depending on how you choose to use it.

Years ago, I pinched a nerve in my spine.  The only way I could comfortably lie down was prone upon a body pillow that belonged to my mother.

Nowadays, my back is fine, but my apartment has crappy electric heat and un-insulated single-pane windows.  Come wintertime, despite a ridiculous amount of bedding and sleepwear, I get cold at night due to drafts from the side of the bed I’m not sleeping on.

Body pillow to the rescue, to create a warm barricade at my back.

A body pillow would also make a great makeshift table for when I’m working in bed, which I do unapologetically, sleep hygiene be damned. 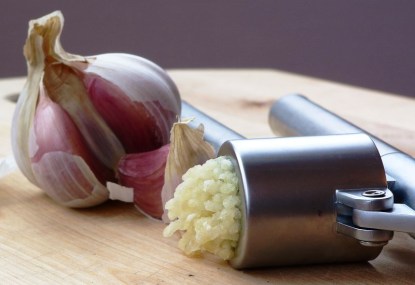 I’ve been mincing cloves of garlic by hand since I started cooking for myself in earnest—about 10 years now, as long as I’ve been a vegetarian.

I love the taste of garlic.  But I utterly despise how the smell of it lingers on my hands for days, no matter how many times I wash them and run my fingers over the stainless steel faucets in the kitchen or bathroom (seriously—does that trick work for anyone?)

It’s gotten to the point that I’ve been trying to peel cloves of garlic using two knives—one to hold it steady and the other to trim the ends and flick off the skin.  This feels about as dextrous and efficient as if Captain Hook were doing it.

No more!  The means to remedy this problem is easily at hand, if more expensive than I expected for a simple kitchen gadget. (How is it that I bought a pizza cutter for $7.99, but all the good garlic presses I’ve seen are three times that price?)

Has the world suddenly gotten darker in the past year?

Trick question.  The world has definitely gotten darker, at least in the metaphorical sense.  But the physical environment seems a lot darker as well.

With Daylight Savings Time now behind us (I’ll save my anti-time change rant for another time), even on days where my workday ends at 4:30pm, it’s already getting dark outside.  On days where my schedule has me working until closer to 6pm, it looks more like 9pm.

I am a cycle commuter.  I get to and from work on most days in most weather conditions via bicycle.  I have lights on my bike and reflective accents on my cycling clothing, and have never had any incidents due to lack of visibility at night.

But for some reason this year, it just feels DARK outside.  I just don’t feel visible enough.  In truth, most people, unless they take special steps to the contrary, aren’t visible enough at night, particularly in the rain.  Pedestrians are some of the worst offenders.

I have no interest in being hit on my bike by an already distracted driver because he couldn’t see me. 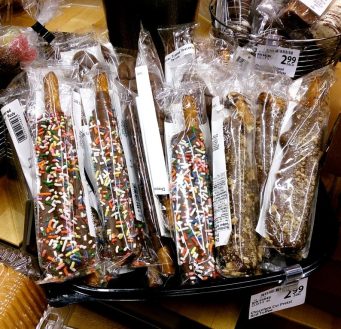 Have you tried one of these things?  Seriously, it might just be the most delicious thing you ever put in your mouth.

The first one I ever had was at Starbucks—a thick pretzel stick that had been dipped first in caramel and then in milk chocolate, resulting in a sweet/salty/crunchy/chewy taste of heaven.

I promptly became obsessed with them, just in time for Starbucks to inexplicably stop carrying them.

But just last month, my local grocery store started carrying candy by a local confectionary.  They had a table of offerings conveniently positioned by the entrance.  And what did I find dead-center on this table?

Chocolate-caramel pretzel sticks … that had also been rolled in sprinkles or English toffee crumbs!

Honestly, this may be all I really need in life, let alone for my birthday.

I’m not at the querying stage yet.  But 2018 is definitely going to be the year that I start, if all goes well, sometime in late spring/early summer.

Which means the time to start researching agents and devising my querying plan with the help of this comprehensive compendium is now.

Not only has the world gotten darker, it’s gotten colder as well.  Again metaphorically, but again the physical environment as well, or so it seems.

I’m an east coast transplant to the wet, west coast, although I travel back and forth across the country a handful of times every year.  I haven’t forgotten what real cold is.  Last December while in Nova Scotia, I was outside shovelling while it was -18°C with a wind chill of -30°C.

I have not gone soft.

Yet something about this damp western climate just chills me to the bone.  More now than in previous years, for I used to wear short pants all year round with varying of thicknesses socks or tights beneath them depending upon the season.

Now I find myself wanting pants that come to my ankles, which I’m further wearing over woolen knee socks and shoes with thick insoles.  And it hasn’t even gone below zero yet. 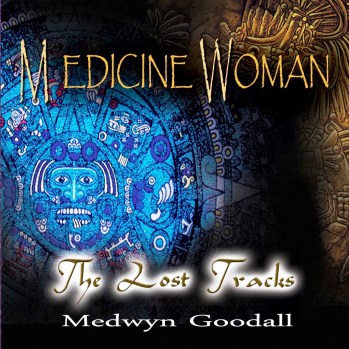 In last week’s post, I mentioned Medwyn Goodall—my favourite New Age musician to write or study to—who I’d curiously never before written about on this blog.

I’m now making up for this by mentioning him in back-to-back posts.  The Mayan-themed album Medicine Woman was Goodall’s breakout title in 1992, and over the last 25 years has gone on to inspire five Medicine Woman sequels, all of which I own and utterly adore.

I will soon also own a recently released album of extra tracks that never made it onto the original Medicine Woman.

To quote the artist himself, “Like stepping into a time machine, the original album now continues with a further 6 tracks from 1992.”

What did you get (or what do you hope to get) for your birthday this year?  Tell me about in the comments.