I’ve mentioned it numerous times before on this blog: I am a highly linear, practical, left-brained type of person.

I’ve also on this blog called myself a writer.

Guess that makes me a left-brained writer.

Left-brained Writer almost became the name of this blog.  Indeed, if you visit my Gravatar page, you’ll see that is the name attached to my profile URL.  This is because I actually registered the name “leftbrained writer” with WordPress and created a corresponding blog.  My first post was going to be titled “In My Right Mind”.

But then I grew concerned: I doubted my ability to carry on with the left/right/write word associations in the long-term, and wondered how interesting such a blog would be to readers anyway.  After all, the adjectives and characteristics related to left-brain dominance, regardless of how strikingly they might be represented in the Mercedes-Benz ad campaign, are hardly exciting. 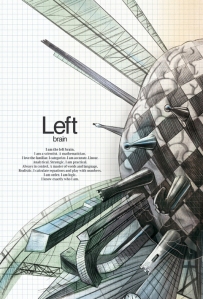 Indeed, depending on how they’re expressed, they might even be mildly insulting, or at least meant that way: logic, facts, rules, analysis, order, reality, safe.

Not to mention all the negative cultural connotations with “left”:

…while “right” gets adroit, conventional, dextrous…

(And don’t even get me started on what they say about my Myers-Briggs personality type, which is ISTJ.  From the Myers-Briggs Field Guide to Dating at the Tumblr site Philolzophy:

Why you want one [an ISTJ for a romantic partner]: Not really sure you do? Maybe you’re an ISTP or ISTJ yourself. Maybe you have really low self esteem and don’t feel like you ‘deserve’ someone interesting.  Where to find one: Jesus, I don’t even know, doing something really boring by themselves. Buying tax prep software at Best Buy?

I’ll have you know, I do my taxes by hand, thank you very much!

In all seriousness, though, I used to be haunted by my left-brain dominance with regards to my writing, for I’ve always considered writing to be an art, yet art is supposed to be the purview of the right-brain.  How could I be an artist if I was left-brained?  Was my friend correct that time I claimed I was an artist and she unceremoniously declared oh no I wasn’t?  Did that mean my writing actually sucked?

The doctor will see you now

Right up until this year, this issue continued to bother me in the back of my mind.  But then I discovered an article in the online version of the Globe and Mail about American neurosurgeon and CNN medical reporter, Dr. Sanjay Gupta, who published his first novel this year.

In the article, headlined “Sanjay Gupta Taps Into Both Sides of His Brain”, Gupta had the following to say about left-/right-brain dominance and writing:

[I]t’s one of the few activities that engages both sides of the brain simultaneously.  You get the words down – that’s from the left side of the brain – and the melody of [the writing], the feeling of it, comes from the right side of the brain. … So all of a sudden you’re stressing pathways. And when you feel your brain working that way, it’s pretty fun.

Reading this was like a revelation to me.  Firstly, because it proves I actually can be both an artist and left-brained. It is possible. (So pooh on you, old friend who tried to take that away from me!  And you too, Philolzophy; artists are not boring!)

Secondly, because it involves Sanjay Gupta, whom my mother and I used to watch on CNN on Saturday mornings six years ago when I was unemployed and living back at home, and when I first started writing my current novel.

That was a difficult time in my life, and watching that program is actually one of the few positive memories I have from back then.  As well, I’ve always had a fondness for Dr. Gupta, as he slightly resembles a much-loved character from my first novel, which I someday want to resurrect from the ignominy of my bottom drawer and re-conceptualize.

But most importantly, I like the article because I have consciously experienced the right-brain contributions of which he speaks – the melody of the writing.

I briefly mentioned this in a past post: when I truly get into the writing zone, particularly when writing dialogue, I stop writing every word and start writing every phrase, all of which have a very musical quality to them, like the lines of a song – a rhythm of stressed and unstressed syllables and intonation that I hear in my head and consciously manipulate on the fly to achieve a specific sound.

Plus, although I’m a firm proponent of outlining my stories, I often don’t know the precise route I’m going to take from Point A to Point B in my outline until I actually sit down to write that section.  Often, I even surprise myself at how I get there.

Of course, it may well be that writing is the only art form my poor left-side dominant brain can handle.  As if to underscore that point, I am awful at all the visual arts: I can’t draw, paint, sculpt, dance or act.

I can sing and play music well, and have pretty spot-on pitch, but then again, music is considered quite mathematical in its construction, so perhaps it’s no surprise at all that both it and my music-esque lines of dialogue, manage to, as it were, sing to me.

Either way, I’m succeeding at getting “in my right mind” at least some of the time.

I also love the article because it mentions it took Dr. Gupta 10 years to complete his novel.  I’m only at year six on mine.  I’m still in the game!  But in the meantime, are there any other left-brained writers out there?  Anyone who does something else very well despite what’s typical for their brain dominance (e.g. a right-brainer whose awesome at math)?  Anyone else whose ever been bothered by what their brain dominance supposedly isn’t good at?  Given the cooperation between the left and right brain when writing, it’s likely this occurs in other arts as well, so does brain dominance even really matter if you really want to do a certain type of art?  Consider leaving a comment.

4 thoughts on “Writing Down the Middle”