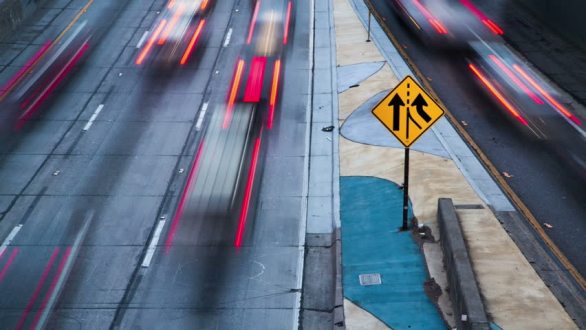 I once read that the two least liked manoeuvres in driving are left turns and merging into traffic.

Left turns, I agree, makes sense.  There’s inherent danger from exposing your broad side as you cut across the path of oncoming traffic.

Left turns also put you at the mercy of the volume of oncoming vehicles; it can be a long wait before you get a chance to make your move.  If you’re a somewhat timid driver, you may fail to take advantage of opportunities that seem iffy, thereby resulting in an intimidating amount of traffic backed up behind you.

Merging, however, is different.  You’re not crossing anyone’s path; you’re all travelling in the same direction; you have much more control over the situation, for all that many drivers choose not to exercise that control.

Of the two manoeuvres, I personally dislike merging the most.  Not because I can’t do it, but because so few others I encounter on the highway can, which often hinders my own merging ability as a result.

On the road again

This past Easter, I spent time in Ontario visiting family and friends.  A portion of that friend-visiting involved a 700-km drive there and back again along Ontario’s famous Highway 401.

I’ve written about this highway before.  Over the decade I lived in Ontario, I’ve at intervals driven the “four-oh-one’s” entire 828-km length.

I’ve also driven several other highways, both in Ontario and elsewhere, having clocked a substantial number of kilometers for someone who neither owns a car at present nor ever has in the 12 years I’ve been a licensed driver.

Because of this, I’ve had the opportunity to observe a lot of highway driving, and to use what I see to hone my own technique.  I’m not as young as I used to be and as a result, now hit up highway rest stations often rather than cruising straight past in a four-hour uninterrupted haul.

This constant stopping thus increases the amount of merging I must do to get back on the highway.

I could be a driving instructor, I think.  I already work in an education-related field and have been told I’m very patient in one-on-one settings.

In the past, I’ve been a passenger to inexperienced drivers who deemed me a very calm and reassuring presence.  Meanwhile, a practicum student we had a work once informed me completely unbidden that she best enjoyed riding with me compared to my colleagues, for I conveyed a sense of “safety and control”.

I realize that almost all people believe themselves good drivers, but in my case, I’m convinced it’s actually true.  I didn’t get my license until my mid-20s, by which time I was much more mature and receptive to the instruction.

In addition, my disposition in general lends itself well to the task.  Under the Myers-Briggs typology, in the information-processing dichotomy, I am an “S” (“sensing”), which leads me to notice the finer details of everything I see and do, particularly when there’s room among those fine details for improvement.

To wit, how to be better at merging:

1) Drive faster on the on-ramp 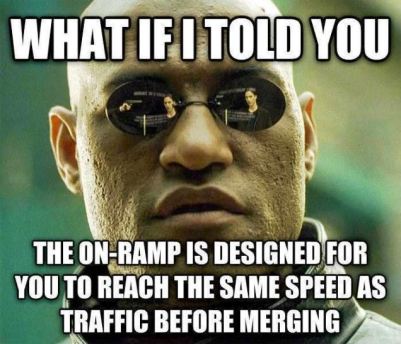 Regardless of whether you’re entering a highway via a municipal on-ramp or transferring from one highway to another via a junction, nine times out of ten, people struggle with merging because they’re driving too slowly.

I see this over and over again: the car in front of me on an on-ramp will be doing 60 km/h while the traffic we’re trying to merge into is travelling nearly twice that.  Such a huge differential in speed makes the job nearly impossible to do smoothly and calmly.

(I know this because whenever I get stuck behind a car going 60, even if I manage widen the gap between us enough to get myself up to 80, my resulting merge generally still is neither smooth nor calm.)

It might seem counterintuitive and even kind of scary to drive faster on a rapidly-ending piece of road.  In practice, though, the faster you go, the slower the adjacent highway traffic will appear to be travelling by comparison.

In addition, getting up to speed makes it possible to merge into smaller space between vehicles on the main highway.  Which brings me to my next piece of advice:

2) Merge sooner rather than later

I see a lot of people waiting until the on-ramp actually ends to make their move over into the main flow of traffic.

This might not pose any problems on a relatively empty highway, but it’s generally not a good practice to get into.

Why wait?  The very first opening that presents itself is the one you should take.  Murphy’s Law being as it is, the closer you get to the end of the merging lane, the less likely you are to find a gap to merge into.

This will require you to either brake (thereby violating tip #1); to drive on the shoulder, which is much narrower than the road and often unpaved and thus insufficient for driving at speed (again violating tip #1); or to force your way over into traffic, which, at best, will earn you a blare from someone’s horn and at worst can injure or kill someone.

What’s more, if you take your sweet time merging while the cars behind you on the on-ramp get over right away, those same vehicles will now be positioned precisely where you want to go, and they might not (or mightn’t be able to) to make room for you.

3) Don’t slow down after completing your merge

This is a really annoying, and frankly, dangerous habit a lot of drivers have.

Even if you merge at a decent speed, you’ve just moved into the buffer zone between the car behind you and the one that was previously in front of it.  This means the car behind you now has a shorter braking space and needs to have faster reaction time to avoid piling into the back of your car. 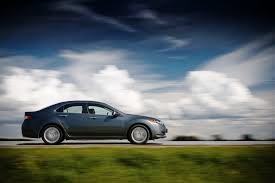 I think it’s a pretty safe assumption that no one wants to be rear-ended at 120 km/h.  The good news is that it’s largely avoidable: after merging, simply increase your speed to match the flow of traffic and allow the normal spacing between cars to reform.

And there you have it; three easy tips to make your merging easier and safer.  But inefficient merging isn’t the only bad driving I observe on the highway.

Do you consider yourself a good driver?  What bad driving do you see?  What tips do you have to prevent it?  Tell me about it in the comments.