It was a tweet I could have written myself:

The first half of this book keep growing in revisions, while the second half keeps… not…being revised.

Cut it in half and call it a duology? 😅

(At least the first part of the tweet; it’s pretty hard to create a duology out of a story that’s already been envisioned as a trilogy!)

After having revised the first half(ish) of my medieval historical WIP five times on my own, and then twice after working with critique partners, and then further rewriting the first half of Act II for a third time post CPs, almost a year had passed since I’d last looked at the rest of the story, i.e. from the second half of Act II to the end.

I could barely remember what happened in this section, let alone how well it had been written by the fifth go-over.

(I’ve been calling my current draft Draft #7 because it applies to the majority of the novel, although “the rest of the story” firmly remains a Draft 5 artifact.)

It’s been a while since I’ve read through a large section of my novel all at once, but it felt like the only way to assess both its quality and its cohesiveness with Act II’s first half, which I only just finished rewriting.

As previous, at each new stage in the process of writing this book, I have Thoughts.

The latter portion of the revision process I described above is one I’ve come to start referring to as semicircular revision.  It’s involved repeated there-and-back-again swings between the beginning and the middle, but never a full rotation through the entire story.

There are pros and cons to working in this way.  A pro is that since the beginning and middle are the two hardest parts to write, once they are strong and present a clear picture of what the story is actually about, the rest becomes that much easier to work with.

Once you get that far, a degree of inevitability emerges as to what needs to happen to resolve the story.

The downside of this process, though, is that once you get used to seeing an increasingly revised beginning and middle, the less-revised remainder of the story becomes a disjointed and, frankly, embarrassingly horrifying read. 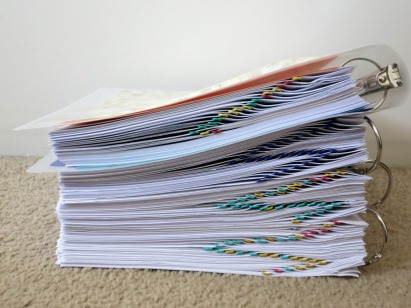 In an effort to soothe my horror by quantifying the amount of work it actually represented, I once again employed my paperclip method, as I’ve done during past read-throughs of my WIP.

That is, I bound each chapter’s pages with a coloured paperclip as a visual representation of its revision needs.

Here’s what I came up with this time:

Sadly, these are relative ratings.  Those three green chapters aren’t that good.  Nor does 12 chapters at all seem like the correct number for where the story is plot-wise, meaning that either the first part is too long (likely) or that this part is too rushed (also very likely).

But the good thing about this system is that it breaks a large task down into smaller, shorter sub-tasks.

Even though I’ll have to revise “only one chapter” twelve different times, each smaller goal feels much more manageable, both physically and mentally.

The whole point of the story

There are many structural flaws in this part of my WIP—incidentally, the same ones I discovered in the first part of the book (had I remembered this material was from two drafts ago, I would have managed my expectations sooo much better.)

The thing that really struck me, though, is that the two biggest things I’m trying to achieve in this story—one, to give the main character a strong emotional journey, and two, to wow the reader with her shrewd plotting and scheming—are the two flattest aspects of this section.

Seriously, the prose is emotionless and unconvincing, full of the reader being told how shrewd the MC is rather than shown the evidence.  Worst execution of one’s authorial intention ever.

Which just goes to show that just because a writer can think up a story doesn’t mean they actually know how to write it—at least not on the first go (or evidently, the fifth one).

The end is near(ish)

I honestly thought I’d already be finished revising this book by now.  Life has gotten in the way a little bit of late, but I’ve never not been working on it, especially since this same time last year.

Regardless, I’m finally starting to see an end to this merry-go-round of rewriting and re-rewriting.  I can see the entire plot now, I know how to fix it, and expect to be able to do so in the near-ish (i.e. the remainder of this year) future.

So I can begin this cycle of torture all over again with an entirely new novel.