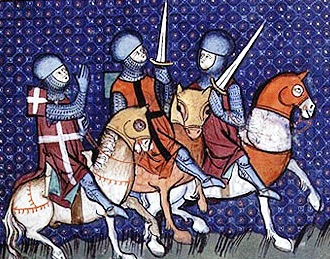 Few aspects of medieval history capture the imagination quite like the medieval knight.

In many ways, it is the knight who seems to embody the spirit of the Middle Ages.

With his horse and sword, his armour, and the perception that he fought with honour and for good, the knight seems to harken back to a simpler time of when the forces of evil had a singular face and could be vanquished with a noble heart and a strong forearm.

At its most basic, though, knighthood was merely a military function that necessitated a measure of social standing.  According to Joseph and Frances Gies, authors of Life in a Medieval Castle,

Originally the term chevalier (caballero, cavaliere, Ritter – the word in all languages, except the English “knight”, means horseman) simply indicated a warrior who fought on horseback, but even in its earliest stage it connoted a superiority of class, since only a man of means could afford a horse. (pp. 169-170)

The training to become a knight began at a young age.  Around seven years old, boys from noble families would be fostered in the homes of other noblemen, such as a relative or the family’s overlord.

For the next seven years, the boy would serve as a page, who waited on his master and received training in the basics of combat.

Pages also received instruction in courtly manners, poetry, music, and also reading and writing.  According to the Gieses, many 13th century knights themselves wrote poetry since, “It was a poor knight who could not read and write.” (p. 174)

At age fourteen, successful pages went on to become squires.  The Gieses explain that,

As a squire, or knight-aspirant, he began his apprenticeship, often in the household of his father’s lord, cleaning out stables, currying horses, cleaning armor, serving at table, while he learned to ride a horse and wield a sword and lance, with plenty of practice at the quintain [a training dummy for practicing attacking with a lance from horseback]. (p. 172)

King David I of Scotland knighting a squire

A squire became a full knight in one of two ways.  Often squires exhibiting great fighting skill or bravery were knighted right on the battlefield.

The more common method of making a knight involved a full ceremony that included both a religious and secular component.

For the religious portion, the aspirant took a bath to purify his body and then kept a vigil in a chapel all night to purify his soul.  The next morning, after Mass, he dressed in new clothing that were white to further symbolize his virtuous spirit.

The Gieses describe the secular portion of the ceremony as follows:

The dubbing ceremony commonly took place in the open air, on a platform or carpet, amid flourishes of trumpets and the music of minstrels.  The youth’s father and several other knights, often including the father’s lord, helped him with his armor and equipment.  The sword, blessed the night before by the priest, was brought; the young man reverently kissed its hilt, in the hollow of which holy relics might be encased.

Now came the climax, the colée, or buffet, usually executed by the father.  For from being a gently symbolic blow, the colée was an open-handed whack that often knocked the recipient, prepared though he was, off his feet.  According to the Spanish writer Roman Lull, the purpose of the colée was an aid to memory, so that the young knight would not forget his oath, now administered….

The ceremony over, the new-made knight sometimes entered the church and placed his sword on the altar, in sign of its dedication to the Holy Church. (pp. 167-9).

A horse, of course

Knighthood was closely tied to the feudal system, which I’ve written about before.  Landed  knights owed knight’s fees to their lord in order to hold and live off the lord’s land, this fee being a set number of days of military service (with full equipment) each year.

The most essential of a knight’s equipment, as the origin of the profession’s name in every other language suggests, was the knight’s horse.

Known as a charger or destrier, the medieval warhorse was a huge beast specially trained to both carry a man in full armour and to withstand the chaos of medieval shock combat.

In the book Mistress, Maids and Men: Baronial Life in the Thirteenth Century, as part of a discussion about horses in the medieval times, author Margaret Wade Labarge writes,

At the top of the scale was the great warhorse of the knight which might cost the almost astronomical sum of £40 to £80.  This was one of the heaviest investments that a knight was forced to make….  Naturally the warhorse was not wasted on everyday service.  Usually the knight rode a palfrey, while his squire or serving-man led the great warhorse in readiness for military use. (p. 158).

A knight’s equipment also included his armour.  In the 13th century, this comprised the following:

The average period a knight served was 40 days a year. 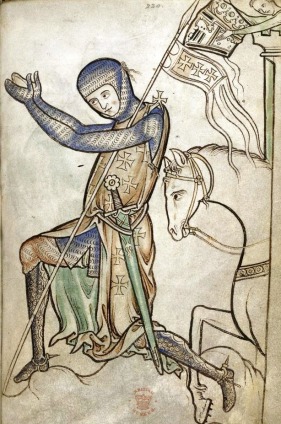 The sense of exclusivity within the knightly class became particularly prevalent in the 12th century.  It was Frederick Barbarossa, the Holy Roman Emperor, who first prohibited peasants from becoming knights (or even carrying lances and swords), and many other monarchs followed suit.

This was supposed to set the knightly class apart from the rest of society as a closed caste, and by the 13th century it did, at least in theory.  However, the Gieses write,

[V]illeins did indeed become knights in the twelfth century, and in the thirteenth the process was almost commonplace.  The chief reason was the growing wealth of the merchant class. (p. 171).

Against the edicts of their monarchs, rather than suppress this practice of purchasing one’s knighthood, the great lords saw it as a money-making opportunity – one that they regulated by setting a fixed fee.

Meanwhile, soldiers who were too poor to buy knighthood often won it through meritorious service to a lord, the same way squires were sometimes knighted on the battlefield.

Regardless of this, according to the Gieses,

Despite the double-ended openness of the knightly class, it nevertheless retained a distinct caste rigidity.  Its newest members, like the parvenus of every age, copied or even excelled the hauteur of their older brothers in aristocracy. (pp. 171-2)

The elitism of knighthood and its association with feudalism notwithstanding, it’s important to note that not all knights were landholders.

Indeed, aside from their horse and armour, a large majority of knights were essentially penniless.

The medieval system of primogenital inheritance was the cause of this.  When a man died, his eldest son received all of the man’s assets while his subsequent sons, even within great families, generally got nothing.

Thus were these landless men sent out to make their own way in the world, possessing the tools and training for a single purpose – fighting and killing.  This left many of them with but one viable career path: that of a mercenary – the antithesis of the courtly, knightly ideal.

A/N: Coming up next month: more on the discrepancy between courtly ideals of knighthood and the reality of life for a knight without land.