Just like chocolate, everyone has a favourite quotation as well. (Image from the movie Chocolat, 2000.)

Quotations, it can be argued, second only to cats, are the foundation of the internet.

For they are found everywhere online: in status updates; in tweets; as part of social media bios; within blog posts.  Sometimes an individual blog post will be nothing but a quotation.

I too enjoy a good quote.  Back in 2010, I did the 12-week self-help, self-directed artistic rediscovery course known as The Artist’s Way, which is the subject of screenwriter Julia Cameron’s book by the same name.

It took me 11 months to complete the program.

For The Artist’s Way, each week requires you to perform a series of thought-provoking or crafty activities, things such writing about the specific people in your life who don’t support your creative endeavours or making a collage of your hopes and dreams.

As well, there are the hallowed Morning Pages (which, for me, became “Evening” Pages almost immediately) – a journaling exercise meant to be performed very day without fail.

I can’t recall if collecting quotes was one of the specified activities, but it was during my journey along “The Way”, initially within my journal, that I began doing so.

2010 was something of a difficult time in general for me: in addition to not having written for 6 years, I was hung up on a guy who didn’t love me, underemployed, chronically short on cash, and overall feeling rather rudderless and insecure about my future.

I started posting the quotes from my journal on my wall to keep my spirits up and to give me a quick burst of encouragement as needed.

I kept those quotes up for years until I eventually got my life better sorted.  I then took them down, pasted them into another journal that I’d made as part of a different Artist’s Way activity, and forgot about them.

Recently, however, I’ve started paying attention to quotes again.  Not because my life has taken another downturn, but because they’re indeed so ever-present on the internet, and of them really, as it were, speak to me.

Out of curiosity, I pulled out my Artist’s Way journal to rediscover the what quotes held meaning for me back then.  Among them include,

There comes a time when you have to play to your strengths rather than fight them.

Both positive and negative change are challenging.

I never really stopped collecting quotes over the next couple of years that followed my completion of The Artist’s Way.  I just stopped cluttering my walls with them, instead preferring to carry most of them around in my head:

A writer of fiction lives in fear. Each new day demands new ideas and he can never be sure whether he is going to come up with them or not.

A writer never has a vacation. For a writer, life consists of either writing or thinking about writing.

Are you waiting or creating?

Courage doesn’t always roar. Sometimes courage is the little voice at the end of the day that says I’ll try again tomorrow.

A goal without a plan is just a wish. 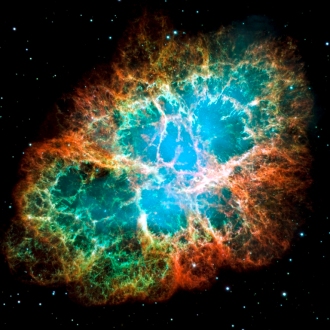 The Crab Nebula: remnants of a star’s supernova explosion in 1054.

My favourite quotes, when examined collectively and sequentially, act as a sort of timeline of my life and a reminder of my various goals and concerns.

In 2010, I was lacking confidence and direction.  In 2012, I was slowly starting to write again and was cautiously determined to make a serious go of it this time.

The two most recent quotes I’ve gathered speak to a general uncertainty about my future as I get older, as well as a desire to overcome my penchant for always remaining in situations that have long outlived their use; for always holding on too tight; for struggling with change and wishing things would forever stay the same in a world and universe where such never was, nor never will be, possible:

In preparing for battle I have always found that plans are useless, but planning is indispensable.

Nothing lasts forever; even the stars die.

What are some of your favourite quotations?  What do they mean to you?  Tell me about it in the comments.

(A/N: To all my Canadian readers, have a very happy Thanksgiving!)

9 thoughts on “Everybody Has a Favourite (Quote)”