This was my friend’s comment on the actress playing Tris Prior in the movie Divergent as we stood in line to buy tickets.

“She wouldn’t be my type if I were into girls,” I replied, thinking I’d missed the punch line of a joke and trying to compensate with humour of my own.

“No,” my friend insisted.  “People are complaining about the actress being too pretty because in the book Tris is supposed to be ugly.  Remember?”

We’d both read the book.  My friend enjoyed it more than I did, and as a result seemed to remember certain details better than me as well.

But now that she mentioned it, I did recall something about Tris considering herself unattractive, or in the very least, plain, and that she was sure her male crush would dislike her because of it.

It’s not uncommon in books with female protagonists – particularly those marketed towards female readers, like Romance or paranormal/dystopian YA – for said protagonist to deem herself unpretty

I understand why authors do this, the message they’re TRYING to convey:

But are these ugly girls of fiction actually achieving any of these goals?  I’m not so certain, for a few key reasons:

1) They still focus on mainstream appearance

Most ugly girls with popular fiction still subscribe to notions of mainstream beauty; they just don’t happen to possess that beauty themselves given which their complaints to that effect make.

And while it’s true, they often come to accept themselves as they are by then end of the story, this acceptance often comes through an alternate form of mainstream validation, i.e. a boy who acknowledges her positive attributes or otherwise accepts her in spite of her insecurities, which then seem to magically disappear.

2)  They don’t usually sound that ugly

Particularly in YA fiction, none of these so-called ugly girls ever strike me as quite that unattractive.

They’re often defined as “plain” or having one or two troublesome features, like frizzy hair, wide hips, or larger than average nose.

“Plain” is not ugly, but rather a matter of style that can be changed with the help of a fashionista friend or a subscription to Michelle Phan’s YouTube channel.

I do get the point that attractive people can feel insecure about their appearance too.  But how much of that is attributable to the very practice in storytelling of having attractive people think they’re not?

And what does say to people who aren’t mainstream pretty? (“If-SHE’S-ugly-there’s-no-hope-for-me”.)

Furthermore, not making a character definitively unattractive in this case seems like something of a bait and switch to me – like the author wants to be able say she’s unattractive, yet not have to attend to the real life consequences this should logically produce for the character.

3) They still fit within the broad societal categories of attractiveness 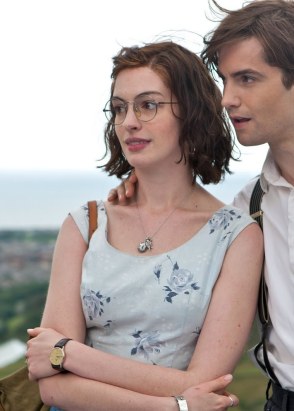 As a follow up to # 2, a lot of the ugly girls we encounter in fiction still have a lot going for them by being white, slim, and able-bodied, three of the dominant determinants of attractiveness in mainstream society.

Emma Morley from David Nicholls’ One Day – while apparently not attractive enough to have been played by Anne Hathaway in the movie according to some – is a pale, bespectacled girl with mousy brown hair.

Marina from Cristin Terrill’s All Our Yesterdays is wealthy, well-dressed, and also white.

Tris, we’re told in Divergent, has fair hair.  That, in addition to being white and slender holds, considerable clout in a society where both the under-representation of ethnic diversity by mainstream media and the colonial exportation of western beauty standards has led to the belief held by many that white and blonde is the epitome of attractiveness.

4) Does it even have anything to do with the story?

I would argue that the book Bridget Jones’s Diary is a good example of the female protagonist’s unattractive appearance being central to the plot.

While not described as ugly per se, we’re regularly informed of Bridget’s weight and overeating, as well as other such vices as smoking, drinking, and falling for unsuitable men, her quest to overcome all of these being the whole point of the story.

In a lot of other books, however, the protagonist’s appearance isn’t really the point at all.

In Divergent, Tris is busy ascending the fighting ranks to survive her initiation into the Dauntless faction.  She’s also trying to figure out what being divergent is all about, and how to use it achieve her goals.

Why does what she thinks she looks like even matter when so many other things more relevant to story could’ve motivated her insecurity about the boy she likes?

Being skilled or special doesn’t preclude anxiety about looks in either men or women.  But it does sometimes feel like it’s included deliberately with female characters to keep them in their place and prevent them from seeming too powerful and proud.

She’s the chosen one; she’s got mad skills that are the envy of her peers, both male and female; everyone is depending on her to save the day.  But she thinks she’s ugly, so she’s not all that.

That’s my opinion of that.

Why can’t a female protagonist just be?  A better way to subvert our looks-focused society through fiction – if not through a frank examination of the impacts of beauty privilege or how adherence to the beauty myth can diminish the quality of a person’s life – is by not making an issue of female characters’ level of attractiveness at all.

By not even commenting on it if unnecessary.

Women already receive enough messages about physical appearance – both subtle ones and those that are more blatant – in visual media.  A great way counteract this is through print media – through fiction.

If not by being part of the solution, than by not further contributing to the problem.

What are your thoughts on how female characters’ appearance is portrayed in fiction (both attractive and unattractive characters)?  Let me know in the comments.

20 thoughts on “Not the Girls We Think They Are: On unattractive female characters in fiction”