Every reader has a T(o) B(e) R(ead) pile; sometimes a TBR pile that’s years in the making. 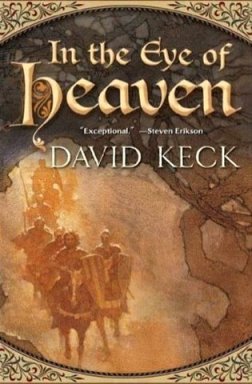 I’m no exception in this regard.  To wit, I’ve been meaning to read the fantasy novel In the Eye of Heaven since its publication in 2007.  Back then, fantasy was my genre of choice, and this book was blurbed by my favourite fantasy author, Jacqueline Carey.

As well, the book’s author – David Keck – is a fellow Canadian and was a debut author in the genre in which I’d hoped to someday be published.

I finally read this book this past May.  It’s success in summiting my eight-years-long TBR pile has a lot to do with its subject matter, as well as my assertion in a previous post that sometimes research for one’s own novel is conducted via fictional sources.

Most of the characters in In the Eye of Heaven are medieval-esque mercenaries.  I plan to write about mercenaries (or “routiers”, as they were called in thirteenth century England and France) in my next historical fiction novel.

And even through my current novel-in-progress in indeed still in progress, because it takes me forever to fully develop a story idea, I’m starting to do so now.

Growing up, I always had a strange fascination with mercenaries in fantasy fiction.  Something about their freedom from the strict discipline of regular army life was appealing to me, as was their ability to choose for whom they fought, and the terms upon which they did so.

Also appealing was their hearty, jocular personalities within high fantasy, which often portrayed them as fun-loving soldiers of fortune.

In the Eye of Heaven is not high fantasy.

Quite the opposite, I would categorize it as low fantasy, in which, according to tvtropes.org (caution: this site is addictive!),

High fantasy heroes are usually all-around nice guys who stand up for the little guy and fight the bad guy. Low fantasy heroes tend to be bitter cynics desperately clinging to their broken moral compass or devil-may-care anti-heroes who save the woman from the evil sorcerer just for the sex. At the very least, they tend to be closer to one of the many shades of Anti-Hero than a Knight in Shining Armor.

That is to say, take away the joie de vivre, the lack of grievous wounds, the bedding that’s free from fleas and isn’t placed alongside others who are having sex or passing gas, and the deep-down sense that these men possess hearts of gold, would only ever fight for the greater good, and aren’t really all about the money.

Also take away the choice.

Most real medieval mercenaries weren’t soldiers of fortune at all, but of the misfortune of not being a firstborn son destined to inherit land upon which to build a living and a future.

During these times, under a system of primogeniture and a lifestyle of perpetual debt, not only did a younger son receive no land, a charitable position in his elder brother’s household was also unlikely.

The book focuses on the predicament of one such second son, Durand, who moves from one sketchy commission to another under a series of self-serving noble employers.  Durand’s goal is to find a permanent situation with a lord, ultimately forever, but more immediately, before winter sets in.

The perils of winter for a mercenary was a new consideration brought to my attention by this book.  In high fantasy, mercenaries tend remain in their merry bands throughout the entire year, for years on end.

It does seem more probable, though, that come winter, they’d disbanded to each fend for himself … and hopefully, ultimately, survive.  More research of nonfiction sources will reveal the truth of this suggestion.

I enjoyed the book.  The author, David Keck, created a masterful, Dark Ages world of hardship and unexplained arcane phenomena left over from an even earlier, darker era.  His use of language was particularly evocative, seeming to follow the cadence of an epic recited in a gloomy hall alongside a smoky, central hearth.

Some reviewers have found Keck’s plot difficult to follow, while others have criticized the inchoate nature of magic as confusing.

But this, I believe, is the whole point.  This world of Durand’s is un-enlightened, dangerous, and perplexing.  We the reader are privy to no more knowledge than Durand himself, and in this way, will succeed or fail right along with him.

5 thoughts on “Adventures in Reading: Soldiers of Misfortune”